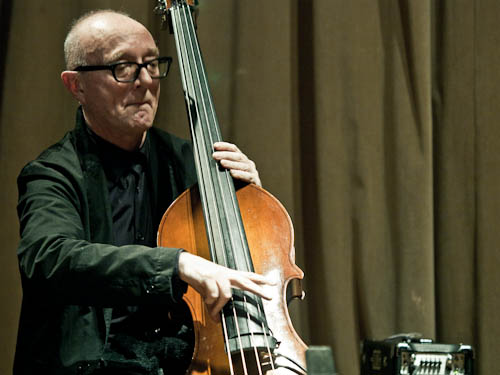 Audible Means is Lisle Ellis’s designation for his new performing ensemble which, since its inception early this year, has been comprised of a mixed membership of both veteran musicians and rising star newcomers from the fields of mainstream jazz and new and improvised music. This evening’s concert will feature Ellis on bass and circuitry; Ellery Eskelin (saxophone) and Erik Deutsch (keyboards.) The performance highlights new compositions and arrangements by Ellis and reflects his exploration for rhythm without set boundaries yet possessing distinct edges.

There will be a free Lisle Ellis CD, Sound On Survival, for the first 30 audience members.

Lisle Ellis is a multifaceted creator whose work reflects his interests in music, visual art, computers/technology and community. One Final Note describes his playing as “truly remarkable in its beauty, intensity, and energy.”

As a composer and improviser-bassist his oeuvre spans three decades and two countries and has brought him international recognition as an artist with an exceptional vision. Critics consider him to possess an important voice and to have made a significant contribution to the field of experimental music. Recent years have also brought him attention as a creator of computer/electronic music and as a visual artist.

He is the 1986 winner and first recipient of Canada’s prestigious Frederick Stone Award, given annually to a musician for integrity and innovation. Ellis also has been active in the experimental music scenes in California. Currently living in New York City, Ellis leads his Audible Means, whose music reflects his interest in electronic music and its applications in improvisational contexts and works toward developing an electro-acoustic architecture he calls string-circuitry-confluence.

Pianist, composer, arranger, teacher producer Erik Deutsch was born in Washington D.C. in 1976. When his family relocated to Nashville in 1982, Erik began Suzuki piano studies at Vanderbilt University and now holds a degree in piano performance from Colorado University. For the past year and a half he has been a resident of Brooklyn, arriving in New York after a decade in Colorado.

Erik also has had the pleasure of working with James Blood Ulmer, Jenny Scheinman, Jessica Lurie, Ron Miles and Charlie Hunter, among others.

Erik leads his own group County Road X, which he formed in 2001. CRX performs cinematic-Americana music (imagine a Stanley Kubrick/Sergio Leone double-feature with an electric Miles Davis soundtrack) and recently was featured at the 2005 Telluride Jazz Festival.

Ellery Eskelin was born in Wichita, Kansas in 1959 and raised in Baltimore, Maryland. He earned a bachelor’s degree in music from Towson University in Baltimore. He has been living and working in New York for over twenty years and has been one of the most sought after sidemen and consistently innovative leaders to emerge from the New York scene of the past two decades.

Eskelin’s recordings as a leader and co-leader (there are currently twenty) have been named in Best of the Year critics’ polls in the New York Times, the Village Voice and major jazz magazines in the US and abroad. He also appears on over forty recordings as a side person. DownBeat Magazine named Eskelin as one of the 25 Rising Stars for the Future in its January 2000 issue (“…young players who not only insure the music’s survival but promise to take it to the next level”) as well as including him in the “Talent Deserving of Wider Recognition” category of their Annual Critics Poll in 1998, 2001, 2002, 2003 and 2004. Eskelin was also a nominee for the prestigious Jazzpar award in 2003.