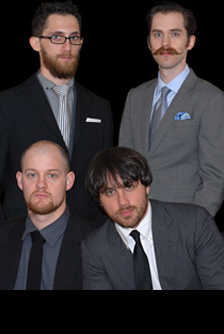 New York-based new chamber group loadbang will perform world premieres of music for the ensemble and electronics by Scott Worthington, Gary Philo, and Nate Wooley in addition to Eve Beglarian’s Island of the Sirens. They will then join forces with the ensemble BRIM to perform the music of Eve Beglarian.

loadbang is building a new kind of music for mixed ensemble. Since their founding in 2008, their unique lung-powered instrumentation (bass clarinet, trumpet, trombone, baritone voice) has provoked diverse responses from composers, resulting in a stylistic palette ranging from whistled Brazilian rhythms and microtonal jazz standards to the decoupled and deconstructed sounds of the second modernity. They have been praised as “cultivated” by The New Yorker, “inventive” by The New York Times and called a “formidable new-music force” by TimeOutNY. loadbang have had pieces written for them by some of the most exciting and important living composers including Andy Akiho, Alexandre Lunsqui, Alex Mincek, Hannah Lash, and Pulitzer Prize winners David Lang and Charles Wuorinen. loadbang also believes in the importance of education and have held residencies at New York University, Cornell University, Carnegie Mellon University, SUNY Fredonia, and others.
loadbangmusic.com