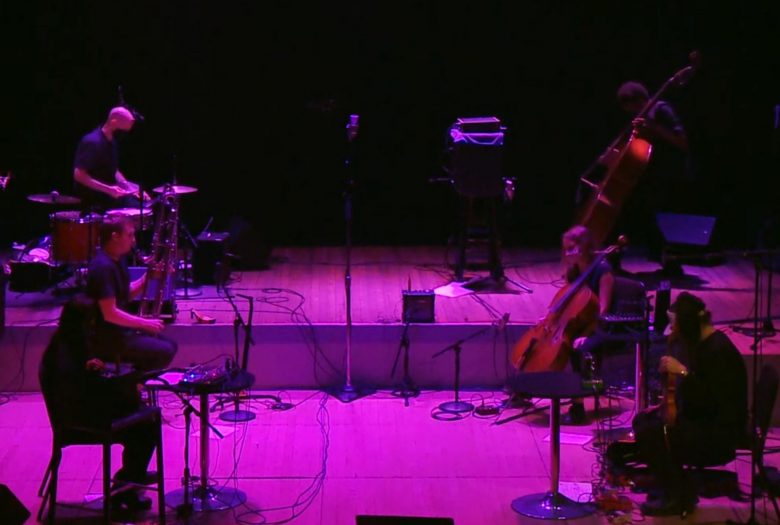 Resident artist Luke Stewart and collaborator Leila Bordreuil continue their work for feedback ensemble. In this iteration, trumpeter Nate Wooley joins the raucous group of musicians utilizing their own feedback apparatuses—in addition to their instruments— for a resulting cacophony of sound, noise, improvisation, and electronic exploration.

This series premiered at Roulette in September 2021 to a live stream audience only.

Luke Stewart is a DC/NYC-based musician and organizer of important musical presentations. He also has a presence in the national and international professional music community. He was profiled in The Washington Post in early 2017 as “holding down the jazz scene,” selected as “Best Musical Omnivore” in the Washington City Paper’s 2017 “Best of DC,” chosen as “Jazz Artist of the Year” for 2017 in the District Now, and in the 2014 People Issue of the Washington City Paper as a “Jazz Revolutionary,” citing his multi-faceted cultural activities throughout DC. In DC his regular ensembles include experimental jazz trio Heart of the Ghost, Low Ways Quartet featuring guitarist Anthony Pirog, and experimental rock duo Blacks’ Myths. As a solo artist, he has been compiling a series of improvisational sound structures for Upright Bass and Amplifier, utilizing the resonant qualities of the instrument to explore real-time harmonic and melodic possibilities. He has performed at many of Washington’s high-profile venues including the Kennedy Center, the Atlas Performing Arts Center, Smithsonian Portrait Gallery, 9:30 Club, Black Cat, and many others throughout DC’s storied DIY community. Stewart is also a presence in the greater community of Creative Musicians, with regular multi-city ensembles including Irreversible Entanglements featuring Moor Mother, James Brandon Lewis Trio, Heroes are Gang Leaders, Ancestral Duo, and has performed in a myriad of other notable collaborations. He has been a featured artist at the Vision Festival, Sonic Circuits Festival of Experimental Music, High Zero Festival of Experimental Improvised Music, Fields Festival, Philadelphia Free Form Festival, Forward Festival, Furious Flower Poetry Festival, and has toured abroad at North Sea Jazz Festival, Toulouse Jazz Festival, Vitoria Jazz Festival, Belgrade Jazz Festival, and Rotterdam Jazz Festival. As a scholar/performer, he has performed and lectured at Harvard University, Johns Hopkins University, Medgar Evers College, George Mason University, Wayne State University, University of Montana, New Mexico State University, and the University of South Carolina. He holds a BA in International Studies and a BA in Audio Production from American University, and an MA in Arts Management and Entrepreneurship from the New School.

Leila Bordreuil is a Brooklyn-based cellist, composer and sound-artist from France. She accesses concepts as diverse as Noise, contemporary classical, free jazz, and experimental traditions but adheres to none of them. Her music mixes deep melancholia with harsh noise-walls at ear-bleeding levels, and was described by the New York Times as “steadily scathing music, favoring long and corrosive atonalities”. Driven by a fierce interest in pure sound and inherent texture, Leila challenges conventional cello practice through extreme extended techniques and unorthodox amplification methods, to the extent she sometimes seems to be playing the P.A system rather than the cello. Her compositions frequently incorporate sound-spatialization by way of site-specific pieces and multichannel installations, and focus on neurological perception and our physiological relationship to sound and space.

Luke Stewart + Leila Bordreuil: Feedback Ensemble is developed as part of Luke Stewart’s Roulette 2022 Residency, made possible with funds provided by the Jerome Foundation. This performance is presented through Roulette’s GENERATE program, providing over 30 artists each year with in-depth creative and technical support.