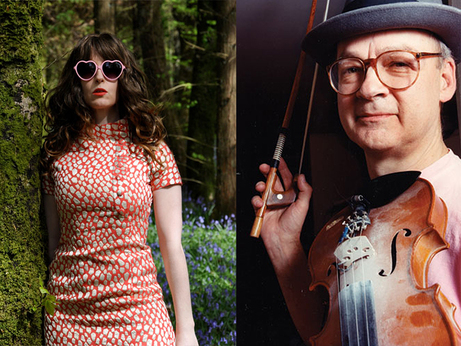 Walshe and Conrad first began working together after they ran from service as household slaves of King Pepy I at the end of Old Kingdom Egypt. They were subsequently monks in Carolingean Gaul during the period roughly 820 to 850, Venetian courtesans at Pope Eugene’s court during the mid 15th century, and prisoners on Reunion Island in 1738, where Walshe tried to secure Conrad’s escape using “remote viewing” techniques. The unfortunate outcome of the latter incident resulted in Conrad’s work as a medicine man in Australia in the 19th century, where in 1834, trying to quell a cattle riot, they both accidentally ingested leprosy vectors and subsequently lost three legs and two arms between them.

New York-based composer and performer Jennifer Walshe was born in Dublin and studied composition at the Royal Scottish Academy of Music and Drama and Northwestern University, Chicago, graduating with a doctoral degree in composition in 2002. A winner of the Kranichsteiner Musikpreis at the Internationale Ferienkurse für Neue Musik in Darmstadt, Germany, in 2000, she was a fellow of the Akademie Schloss Solitude, Stuttgart between 2003 and 2004, and from 2004-05 she lived in Berlin as a guest of the DAAD Berliner Künstlerprogramm. Her music has been performed and broadcast in Ireland and abroad and she has received commissions from festivals including Performa (New York), Båstad Kammarmusik (Sweden), Ultraschall (Berlin), Ars Musica (Brussels), Steirischer Herbst , Wien Modern (Austria), Wittener Tage für neue Kammermusik, Hamburger Klangwerktage, Donaueschinger Musiktagen (Germany), the Huddersfield Contemporary Music Festival (England), Gaida (Lithuania), and SoundField (Chicago).