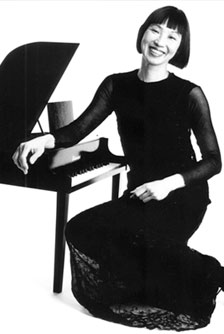 A program highlight will be the first live US performance of one of Cage’s last works, his Extended Lullaby. A re-working of Satie’s Vexations, Extended Lullaby was originally created for 12 music boxes. Ms. Tan will present Extended Lullaby in a multiple-toy piano arrangement.

Other works include Satie’s Pieces Froides and his Sports et Divertissements performed with Satie’s poems and projections of the original Charles Martin accompanying illustrations; Cage’s Dream, In a Landscape together with a film by Meredith Holch; Satie Blues by Twining, Mompou’s Canco i Dansa and the US premiere of Waiting for C-A-G-E by Raickovich.

In the lobby Ranjit Bhatnagar’s robot toy piano version of Satie’s Vexations will run for the duration of the show.

Margaret Leng Tan has established herself as a major force within the American avant-garde; a highly visible, visionary pianist whose work sidesteps perceived artificial boundaries within the usual concert experience, she creates a new level of communication with listeners. Embracing aspects of theater, choreography, performance, Tan has brought to the avant-garde a measure of good old-fashioned showmanship tempered with a disciplinary rigor inherited from her mentor, John Cage. This has won Tan acceptance far beyond the norm for performers of avant-garde music, as she is regularly featured at international festivals, records for adventurous labels such as Mode and New Albion, and has appeared on American Public Television, at Lincoln Center and Carnegie Hall.

Exploring crosscurrents between Asian music and that of the West led her to John Cage. This sparked an active collaboration between Cage and Tan that lasted from 1981 to his death in 1992, during which Tan gained recognition as a pre-eminent Cage interpreter. She was the featured performer in a tribute to Cage’s memory at the 45th Venice Biennale. During this Cage centenary season Tan will participate in celebrations in the US, Europe and Central America.

Margaret Leng Tan has been hailed as “the queen of the toy piano” (The New York Times). Her groundbreaking albums, The Art of the Toy Piano (Philips/Universal) and SHE HERSELF ALONE: The Art of the Toy Piano 2 (mode), made her the world’s first toy piano virtuoso. Evans Chan’s film, Sorceress of the New Piano: The Artistry of Margaret Leng Tan, nominated for “Best Music Documentary” at the American Film Institute/Discovery Channel’s SilverDocs, is now available on Mode.