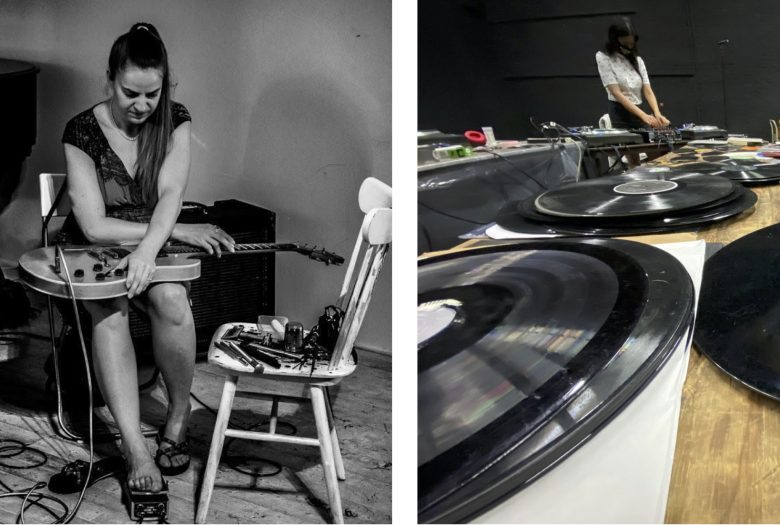 Born in Lima, Peru and based in NYC, Maria Chávez is best known as an abstract turntablist, sound artist and DJ. Coincidence, chance & failures are themes that unite her book objects, sound sculptures, installations & other works with her improvised solo turntable performance practice. Her latest album, “Maria Chavez PLAYS Stefan Goldmann’s Ghost hemiola” was nominated for a Preis der Deutschen Schallplattenkritik in Jan. of 2020. Currently, Maria is on the cover of the textbook on the History of Experimental & Electronic music by Routledge Publishing, is a David Tudor and Robert Rauschenberg Arts Fellow and a Research Fellow for Goldsmith’s Sound Practice Research Department (2015-17). Her large scale sound & multi-media installations along with other works have been shown at the Getty Museum, the JUDD Foundation, Documenta 14 in Kassel, Germanyand HeK (Haus der elektronischen Künste Basel) amongst many other institutions around the world. She is currently an artist in residence with EMPAC (The Curtis R. Priem Experimental Media and Performing Arts Center) until 2022 and will present a new sound installation for BRIC Arts “Latin Abstract” painting exhibition from Jan. – May 2021. She is on a medical sabbatical due to receiving brain surgery in Feb. 2019 and will return to performing for the public in 2022-23. She appreciates everyone’s patience and compassion during this difficult time.

Sandy Ewen is an experimental guitarist, artist and architect currently based in Brooklyn NY & Houston TX. Ewen’s approach to playing is centered around found objects and extended guitar techniques. She performs solo and in many diverse musical and multi-media collaborations. She has about two dozen musical releases; recent ones include a solo LP on Gilgongo Records (You Win), duo and trio CDs with Weasel Walter & Damon Smith. A second cassette on Astral Spirits with percussionist Lisa Cameron is due out this fall. Ewen frequently tours the US and parts of Canada, primarily playing solo sets. In 2019 she performed in Mexico City both solo and with her all female large ensemble before touring the west coast and central US in February & March. She played the Electric Eclectics Festival in Ontario and numerous gigs around NYC. In 2018, she performed at the Sant’anna Arresi Jazz Festival in Sardinia, the Experimental Sound Studio Option Series in Chicago, and the High Zero Festival in New York. Ewen toured Europe in 2017, performing solo sets and in collaboration with Steve Jansen (tapes and electronics) and Maria Chavez (turntables). While in Brooklyn, she has collaborated with many musicians, including Michael Vatcher, Bill Nace, Sam Newsome, Stephen Gauci, Kevin Shea, Cecilia Lopez, Weasel Walter & many others. Ongoing projects include a duo with Damon Smith, leading an all-female large ensemble, the trio Etched in the Eye, a duo with Tom Carter called Spiderwebs, and the experimental rock band Weird Weeds with Sarah Hennies & Aaron Russell. In years past, Ewen has performed alongside Roscoe Mitchell, Keith Rowe, Lydia Lunch, Pauline Oliveros and many others, and has performed and recorded with Jaap Blonk, Henry Kaiser, Joe McPhee and more. In 2014, she performed at San Francisco’s 13th Annual Outsound New Music Summit, and she has made several appearances at Austin’s annual No Idea Festival. Ewen enjoys making video art and digital animations and has created many video pieces to accompany her music and others’.

Photo courtesy of the artist