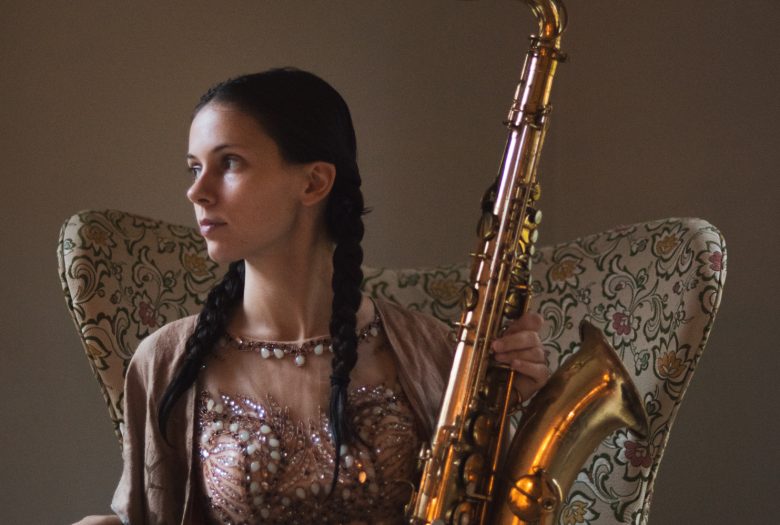 For the first concert of her residency, María Grand performs Music as a User’s Manual, a series of compositions that seek to functionalize the rituals that make up a concert experience. It asks what is there to take home after one goes to a concert – is there any real change that happens, and are there any actual tools offered to listeners that they can implement in their lives? Grand strives to create self-contained music that is not a means to an end, rather that the means are the end – where sound illustrates, concretely and abstractly, something everyone can do. She will be joined by Ganavya Doraiswamy on vocals, Joel Ross on vibraphone, and Rajna Swaminathan on percussion.

María Grand is a saxophonist, composer, educator, and vocalist. She moved to New York City in 2011. She has since become an important member of the city’s creative music scene, performing extensively in projects including musicians such as Vijay Iyer, Craig Taborn, Jen Shyu, Steve Lehman, Aaron Parks, Marcus Gilmore, Jonathan Finlayson, Miles Okazaki, etc. María writes and performs her original compositions with her ensemble, DiaTribe; her debut EP “TetraWind” was picked as “one of the 2017’s best debuts” by the NYC Jazz Record. The New York Times calls her “an engrossing young tenor saxophonist with a zesty attack and a solid tonal range”, while Vijay Iyer says she is “a fantastic young saxophonist, virtuosic, conceptually daring, with a lush tone, a powerful vision, and a deepening emotional resonance.” María is a recipient of the 2017 Jazz Gallery Residency Commission and the 2018 Roulette Jerome Foundation Commission. She is a member of the Doug Hammond quintet, has toured with Antoine Roney, and performs regularly with her own ensemble, as well as with RAJAS, led by Carnatic musician Rajna Swaminathan, and Ouroboros, led by Grammy Award winner alto saxophonist Román Filiú. She has toured Europe, the United States, and South America, playing in venues and festivals such as the Village Vanguard in NYC, La Villette Jazz Festival in Paris, Saafelden Jazz Festival in Austria, Millennium Park in Chicago, the Blue Whale in LA, IloJazz in Guadeloupe (FR), and many others.

Hailed as “extraordinary” (DownBeat) and “most enchanting” (NPR) vocalist and composer Ganavya Doraiswamy has carved a niche for herself at the nexus of South Indian vocal styles and contemporary music, characterized as “fervently creative vocalist” with an “aching emotional intensity” (JazzTimes). Recently, she sang on the Quincy Jones-produced Tocororo, which hit #1 on jazz charts. Her debut album, Aikyam: Onnu, (“Harmony: One”) will be released on May 2nd with a show at the Rubin Museum.

Rajna Swaminathan is an acclaimed mrudangam (South Indian percussion) artist and composer. She tours regularly with several renowned Indian classical musicians and dancers. Since 2011, she has been studying and collaborating with eminent musicians in New York’s jazz and creative music scene, including Vijay Iyer, Miles Okazaki, and Amir ElSaffar. Culling from her experience incorporating experimental and polyrhythmic methods into her artistic practice, Rajna formed the ensemble RAJAS, which collectively explores new textural and improvisational horizons at the nexus of multiple musical perspectives. Rajna is also active as a composer-performer for dance and theatre works. She has toured widely with the acclaimed Ragamala Dance and has worked extensively with playwright Anu Yadav.

Chicago native Joel Ross is a “bright young vibraphonist on his own rocket-like trajectory.” (Nate Chinen, The New York Times). Joel has performed with many of jazz’s most lauded artists including Ambrose Akinmusire, Christian McBride, Gerald Clayton, Louis Hayes, Wynton Marsalis and Herbie Hancock, among others. He is an integral part of fellow Chicago native Marquis Hill’s Blacktet, and is increasingly active as a bandleader and composer. He is currently based in New York City.

María Grand’s residency and performance are made possible by the Jerome Foundation.