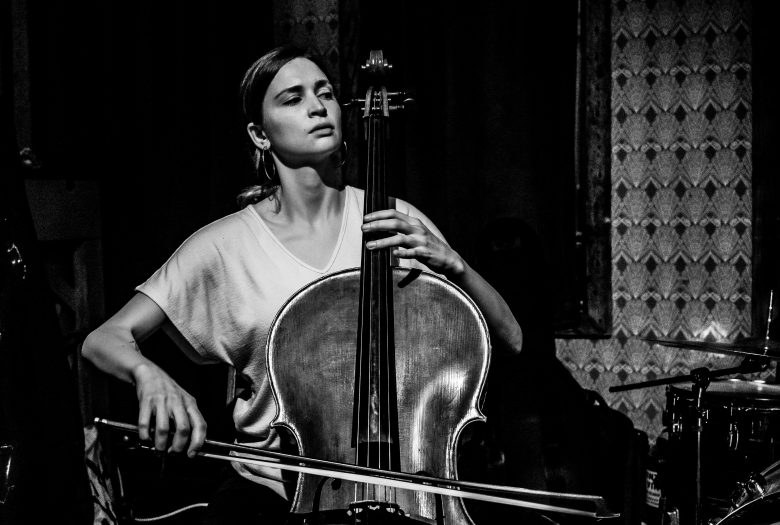 The album was created as a series of unedited improvised pieces for cello and pedals, reflecting not only Roberts’s extraordinary abilities as a cellist but also a profoundly unique creative voice responding to a deeply troubled environment. “The tone of the material, and the title, reflect what was going on both globally and personally for me at the time,” Mariel writes. “The idea of an “armament” is a collection of weapons, and when I chose that title I was thinking about how nearly everything feels weaponized right now – things that should not be weapons are being used as such.”

Harshness and fragility are key elements of Roberts’s music. While Armament represents a dark, intense experience, its extended-technique cello performances sounding alien, thunderous, disturbing, and often like anything but cello, beneath the controlled, distressed, nihilistic miasma lies a very human heart. Foggy, gloomy passages roll by with gaseous coldness, sometimes pricking the ear with minute insect chirrups, sometimes gathering into powerful, momentous tidal waves of sound. But thematic throughout the album are moments that reveal a longing for peace amidst the chaos, rewarding a deep and close listen. Contrasting elements are set against each other to push and explore, resulting in minimal, spare near-silence swallowed into overwhelming black holes of noise, and explosive, painful ferocity suddenly yielding to plaintive, elegiac melancholy. Armament can be perceived as both static and full of motion.

Roberts will be accompanied by Brian Chase and Mario Diaz de Leon.

American cellist and composer Mariel Roberts is widely recognized not just for her virtuosic performances, but as a “fearless explorer” in her field (Chicago Reader). Her ravenous appetite for collaboration and experimentation as an interpreter, improvisor, and composer have helped create a body of work which bridges avant-garde, contemporary, classical, improvised, and traditional music. Roberts is widely recognized for her “technical and interpretive mastery” (I care if you listen) and for performances which seethe with “excruciating intensity” (The Whole Note). Roberts has appeared as a soloist and chamber musician across four continents, most notably as a member and co-director of the Wet Ink Ensemble (New York Times “Best Classical Music Ensemble of 2018”). She performs regularly on major stages for new music around the world, and Roberts’ compositions have been performed at venues such as Merkin Hall and Miller Theater in New York City.

Mariel Roberts: Armament Album Release will be presented virtually and available for free on a variety of streaming platforms. Roulette’s theater is currently closed for public performances as a result of the Covid-19 pandemic and the safety measures that Roulette has put in place to keep staff, artists, and the public safe.

Brooklyn-based musician Brian Chase is the drummer for Grammy-nominated rock band Yeah Yeah Yeahs, NYC’s experimental music community and Drums and Drones, a solo project with a compositional focus on the harmonic resonances derived from drums and percussion. As an exceptionally versatile performer, Brian’s music has taken him across the world to such notable stages as the Sydney Opera House, the Reading and Leeds Festivals, and the Metropolitan Museum of Art as well as countless independent art spaces of music’s ‘underground’ communities. Recorded works include several with Yeah Yeah Yeahs and many with leading improvisors and composers such as Zeena Parkins, Catherine Sikora and Jeremiah Cymerman.

Mario Diaz de Leon is a composer, performer, and educator, whose work encompasses modern classical music, experimental electronic music, extreme metal, and improvised music. Noted for their bold combination of acoustic instruments and electronics, his compositions have been documented on many recordings, often produced in collaboration with the International Contemporary Ensemble (ICE). Born in Minnesota, he has lived in New York City since 2004, and received his doctorate in music composition from Columbia University in 2013, where he studied with George Lewis and Fabien Levy.