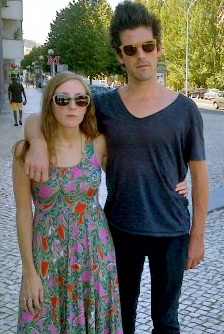 The meeting of guitarists Brandon Seabrook and Mary Halvorson is an intense and high-energy affair filled with noise and beautiful melodies, tech-metallic squealching converging with post-mettaloid Gretsch shredding and a flurry of post-plectrum electric exactitude.

Guitarist/Banjoist Brandon Seabrook was named him “NYC’s Best Guitarist of 2012” by the Village Voice and he has been profiled in The New York Times, The Wall Street Journal, Fret Board Journal, NPR, and the UK music journal Wire. The New York Times called him, “…a man apparently hellbent on earning the title of World’s Least Rustic Banjo Player.”. His group’s two self-titled albums, Seabrook Power Plant I (2009) and Seabrook Power Plant II (2011), were released on Brooklyn’s Loyal Label. Time Out NY praised their debut album as “not only one of the most baffling experimental releases of the year, it’s also one of the best.”
seabrookpowerplant.com

Check our Blog for an interview with Mary Halvorson and Brandon Seabrook about their new collaboration.