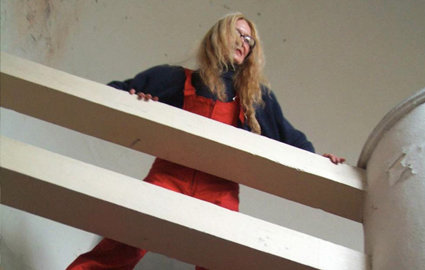 Maryanne Amacher is a composer and sound installation artist. Her pioneering work in acoustics and architectural installation has earned her numerous grants and prizes, including awards from the Foundation for Contemporary Performance Arts, Inc., Guggenheim Foundation, National Endowment for the Arts, New York Foundation for the Arts, Pew Memorial Trust. She was the recipient of the Prix Ars Electronica Golden Nica Distinction in Computer Musik in 1997, 2000, and 2005. Major works include the telepresence series CityLinks #1-22 (1967- ); the architecturally staged Music for Sound-Joined Rooms (1980- ); and the Mini-Sound Series (1985- ). She has presented pieces in solo and group shows at the Museum of Contemporary Art, Casa de Serralves, Porto, Portugal; Whitney Biennial (2002); Kunsthalle, Basel; Galerie Nachst St. Stephan, Vienna; Kunstmuseum, Bern; Kunsthalle-Krems; Panasonic Hall, Tokyo; Walker Art Center, Minneapolis; Museum of Contemporary Art, Chicago. Amacher was commissioned by John Cage to compose the sonic environments for Lecture On The Weather and for his solo voice composition Empty Words, and to perform these works with him (1976-84). She also received commissions from Merce Cunningham to create the repertoire music for Torse. Amacher taught at MIT while a fellow at the Center for Advanced Visual Studies (1972-76), and was a Bunting Institute Fellow at Harvard University (1978-79) and a DAAD Fellow in Berlin (1986-87).