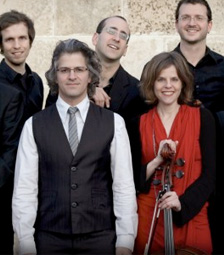 Meitar, Israel’s leading new music ensemble, comes to us direct from Tel Aviv for their American debut. Ha’aretz has called them “some of [Israel’s] best musicians” and they have won numerous awards in Israel and performed in some of the most prestigious venues and festivals globally. The concert will feature a world premiere MATA commission by Bryan Jacobs; a world premiere by Israeli composer Ofer Pelz; Enda Bates’s crepuscular Calls from the Fog for flute and electronics; Marcin Stancyzk’s alien solo for cello and electronics, Mosaique; and direct from Mercury, a brand new arrangement of Christopher Bailey’s microtonal hymn of self-immolation, performed in the Mercurian language by the mesmerizing duo of Sukato and Meredith Borden and accompanied by live video by Charles Woodman.