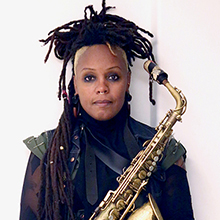 Last year the Chicago-born, Brooklyn-based, AACM-veteran saxophonist Matana Roberts released to much acclaim THE CHICAGO PROJECT, a recording of dynamic compositions that paid homage to her southside windy city roots. This year she is working on a a set of soundscapes to be recorded that pays homage to her big apple wanderings. Interpreted by a band of one-of-a-kind NYC sound warriors, ILLUMINATION is a collection of soundpaintings that testify to why any artist would chose to live in New York in the first place. Acity unlike any other, with an artistic spirit unlike any other: an Illumination in sound, space, real time; a testament to the tenacity of the creative human spirit.

Brooklyn based sound artist Matana (mah-tah-nah) Roberts, is a dynamic saxophonist, composer and improviser, who tries to expose in her music the mystical roots and spiritual traditions of American creative expression.

As a Chicago native she was fortunate enough to be surrounded by musicians who showed her by distinct example the importance of listening to one’s personal creative voice while at the same time using the profound and many layered traditions of jazz and improvised musics to act only as her creative guide, not as her creative definer. By using their mentorship, she has been able to craft a voice and creative focus that truly speaks to her own true artistic individuality. She feels strongly that her music should not only reflect the many colors and moods of universal human emotions, but that it should also testify, critique, document, and respond to the many socio-economic, historical, and cultural inequalities that exist not only in this country, but all over the world.

Matana, a nominee and recipient of national commissions, residencies and awards, has appeared as a collaborator on recordings and performances in the U.S., Europe, and Canada.She is an avid freelancer on a wide array of artistic projects, and has played alongside some of the most intriguing creative sound visionaries spanning across genres of this time period. www.matanaroberts.com