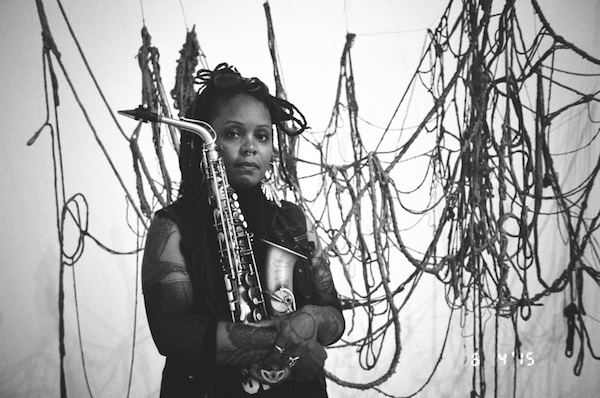 One of the first “picture book” texts that Saxophonist Matana Roberts was given to read as a child was Joel Augustus Roger’s Africa’s Gift to America. The first edition originally published in 1961 was created by a man who spent over 50 years devoting his life to research that showed that people of African origin had a history that was an inseperable part of the history of mankind. The quinteseential rennasaince man, J.A. Rogers was an artist, Pullman porter, journalist, linguist, author and scholar of the highest degree. Though unable to afford to recieve a college education, he created his own scholarship through through a voracious reading habit that allowed him to expand his sometimes controversial documentation of the contributions of black folk to America. His single major mission in life was to affirm the humanity of the African personality, so that young people would have a document to inspire them not to be ashamed of their cultural legacy. Matana Roberts’ father was a recipient of this documentation in his youth and was able to pass on this positive piece of important documentation to his children. And so it was.

In this age of fifty bullet armed force brutality strategies =800Saxophonist Matana Roberts has decided to pay homage to the positive role of black manhood in her life and her music. Based on the works J.A. Rogers, as well as her own personal research into the minds of men of the diasporic persuasion that she has admired and been inspired by she is using this as an artistic backdrop for reflection that she will piece together in a celebration of sound. Written for mini brass band, language ensemble and movement master.

Chapter 5 of the Coin Coin Continuum.