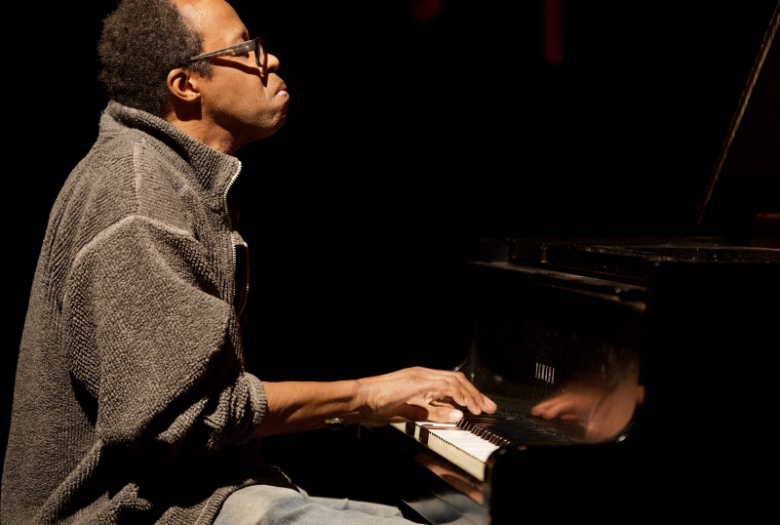 Matthew Shipp’s new solo piano cd “4D” is the complete synthesis and culmination of all of his past Thirsty Ear releases, with the added wrinkle of standards reinterpreted as only he could muster, while combining his own brand of composition to the mix. Matt’s musical language, having been refined and mutated as has his career has continued to grow at exponential rates, allowing Mr. Shipp to fully explore the hidden aspects of jazz. Critics have called it “…an excellent record” – (New York Times) and ” His best solo effort yet, 4D. The pieces bristle with powerful dynamic shifts and brilliant uses of space and silence.” (- Chicago Reader). About the musician Village Voice proclaims: “The pianist digs deep,often bringing a molten motion to his work — it’s thick with ideas. On the upcoming 4d,you can hear this deliberate approach unfold; every left hand depth charge and right hand squiggle justifies their existence.”

Matthew Shipp was born December 7, 1960 in Wilmington, Delaware. He started piano at 5 years old with the regular piano lessons most kids have experienced. He fell in love with jazz at 12 years old. After moving to New York in 1984 he quickly became one of the leading lights in the New York jazz scene. He was a sideman in the David S. Ware quartet and also for Roscoe Mitchell’s Note Factory before making the decision to concentrate on his own music.

Mr Shipp has reached the holy grail of jazz in that he possesses a unique style on his instrument that is all of his own- and he’s one of the few in jazz that can say so. Mr. Shipp has recorded a lot of albums with many labels but his 2 most enduring relationships have been with two labels. In the 1990s he recorded a number of chamber jazz cds with Hatology, a group of cds that charted a new course for jazz that, to this day, the jazz world has not realized. In the 2000s Mr Shipp has been curator and director of the label Thirsty Ear’s “Blue Series” and has also recorded for them. In this collection of recordings he has generated a whole body of work that is visionary, far reaching and many faceted.