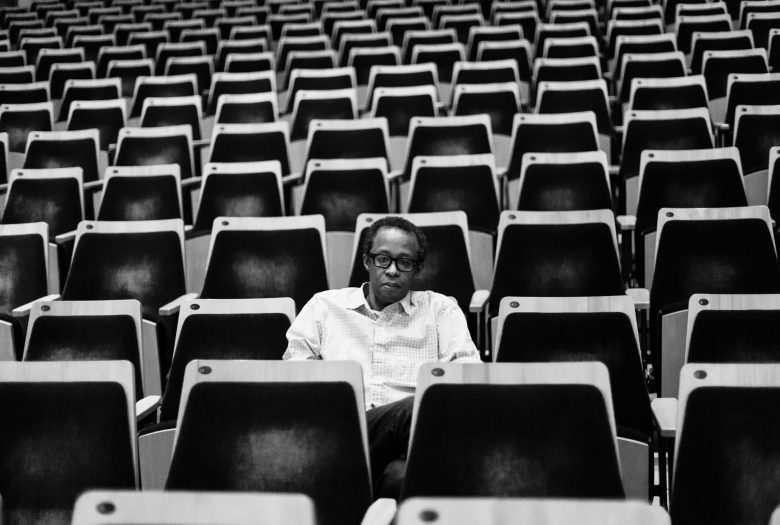 Continuing to hone a singular cosmic musical language, Matthew Shipp began celebrating his landmark 60th year on earth with the creation of a new solo piano recording—The Piano Equation—which is also the inaugural release on the brand new Tao Forms label, released on May 1, 2020. The ongoing celebration of this momentous year continues with his solo performance on this evening at Roulette.

Over more than half of his lifespan, Matthew Shipp has built up an unparalleled body of work and a wholly original musical language that only becomes more hyper-focused and distinctive with the passage of time. Shipp’s abstract eloquence is on vivid display when he is alone at the piano, brilliantly solving his higher-order musical mathematics, approaching each new unknown from unexpected vantage points as in some form of cubist algebra. Shipp builds his solo music in a cellular fashion, formed, like the building blocks of human life, out of disparate elements that combine and evolve in novel and fascinating forms. “There are billions of different human beings on the planet, all constituted with the same genetic material but all completely different,” he says. “All of these pieces can be generated with a different mother/father idea and the basic cellular material can unfold in billions of ways.”

Classical, stride, swing and the avant-garde collide like so many elemental particles, the aftereffects radiating outward in increasingly complex and intricate formations. The scientific, the personal, the political and the fantastic co-exist throughout Shipp’s work, melding in a radical vocabulary which speaks with its own alien yet familiar logic. Fragments of melody coalesce and transform, dissolve or shatter into kaleidoscopic reveries.
While some may have used the arrival of such a landmark occasion as their 60th birthday to look backwards, Shipp will spend the year continuing to move resolutely forward, further evolving a voice that is as intimately personal as it is cosmically adventurous.

Matthew Shipp: The Piano Equation was originally scheduled for June 13, 2020, but was postponed and rescheduled due to Covid-19. Roulette’s Fall season will be presented virtually and available for free on a variety of streaming platforms. Our theater is currently closed for public performances as a result of the Covid-19 pandemic and the safety measures that Roulette has put in place to keep staff, artists, and the public safe.

With his unique and recognizable style, pianist Matthew Shipp worked and recorded vigorously from the late ’80s onward, creating music in which free jazz and modern classical intertwined. He first became well known in the early ’90s as the pianist in the David S. Ware Quartet, and soon began leading his own dates – most often including Ware bandmate and leading bassist William Parker – and recording a number of duets with a variety of musicians, from the legendary Roscoe Mitchell to violinist Mat Maneri, the latter another musician who began making a name for himself in the ’90s. Through his range of live and recorded performances and unswerving individual development, Shipp has come to be regarded as a prolific and respected voice in creative music into the new millennium.

Born in 1960 and raised in Wilmington, Delaware, Shipp grew up around ’50s jazz recordings. He began playing piano at the young age of five, and decided to focus on jazz by the time he was 12. He played on a Fender Rhodes in rock bands while privately devouring recordings by a variety of jazz players. His first mentor was a man in his hometown named Sunyata, who was enthusiastic about a variety of subjects in addition to music. Shipp later studied music theory and improvisation under Clifford Brown’s teacher Robert “Boisey” Lawrey, as well as classical piano and bass clarinet for the school band. After one year at the University of Delaware, Shipp left and took lessons with Dennis Sandole for a short time, after which he attended the New England Conservatory of Music for two years.

Shipp moved to N.Y.C. in 1984 and soon met bassist William Parker, among others. Both were playing with tenor saxophonist Ware by 1989. Meanwhile, Shipp had debuted as a recording artist in a duo with alto player Rob Brown on Sonic Explorations, recorded in November 1987 and February 1988. He then went on to lead his own trio with Parker and drummers Whit Dickey and Susie Ibarra. He has recorded an astonishing body of work for since for a number of labels including HatArt, Thirsty Ear, RogueArt, AUM Fidelity and ESP. In 2020, his new work for solo piano was the inaugural release on the brand new Tao Forms label.