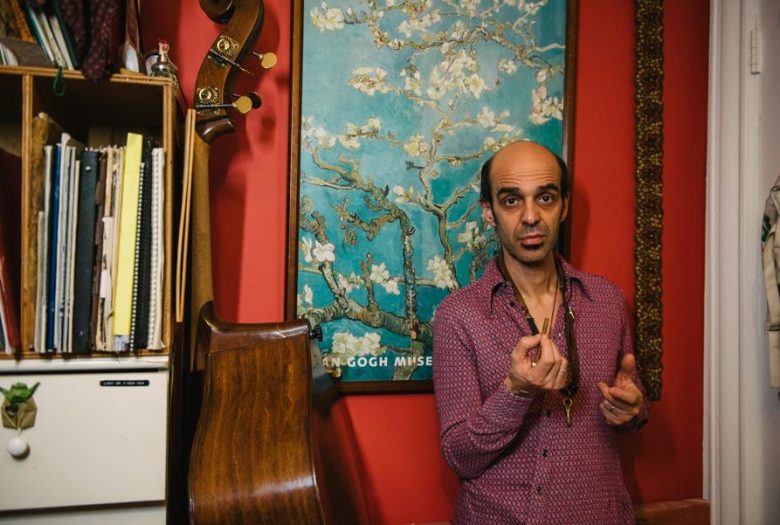 Roulette is pleased to present the music of Nine, a seamless weave of free improvisation and notated scenarios, textures and grooves, dissolving soundscapes, spontaneous kaleidoscopes of instrumental recombination, the coiling and uncoiling of melody, rhythm, polyphony as prismatically refracted through the mirrored orchestration of two reeds, two brass, two strings, two percussions, and one piano. The evening is composed of nine moments — some heavily textured, others extremely sparse and thin, some intricately notated and rhythmically specific, others lightly sketched forms for floating improvisations. In response to the first performance of the group, poet Marjorie Welish wrote that it was “ a privilege to hear such musicianship enabling the mental life of sound!”

The nonet developed at Michaël Attias’s Stone Residency in August 2018. At its core, the group is the trio of John Hébert, Satoshi Takeishi, and Attias, which has performed and recorded three albums since 2003 under the name of Renku. The remaining members have all been drawn from Attias’s many groups and collaborations over the years. These players, among the most rhythmically advanced and inventive in the world, are also timbral wizards and passionately lyrical improvisers, painters in sound that fill the spaces of an ensemble with liquid light and color beyond any such closed terms as solo or ensemble playing.

Michaël Attias is a saxophonist/composer based in New York City since 1994. As a leader, he has released seven critically-acclaimed albums, most recently the 2017 debut of the Michaël Attias Quartet, Nerve Dance, with Aruán Ortiz, John Hébert, and Nasheet Waits. As a sideman, he has performed and recorded all over the world alongside some of today’s most original and compelling musicians, including Anthony Braxton, Paul Motian, Masabumi Kikuchi, Anthony Coleman,Tony Malaby, Ralph Alessi, Oliver Lake, and many others. Attias has also composed and designed sound in New York and at various regional theatres. He was named a 2000 Artists’ Fellowship Recipient of the New York Foundation for the Arts and was awarded MacDowell Arts Colony fellowships in Fall 2008 and Summer 2016.

In his two decades as an integral member of the thriving improvised music community of New York City, saxophonist and composer Tony Malaby has emerged as a wholly unique and singular voice. Malaby was recently named one of Downbeat’s “80 Coolest Things in Jazz”, saying that, “[Malaby] is a formidably accomplished soprano and tenor saxophonist with enviable tone and an endless font of compelling ideas, yet he steers his music away from perfection,” and that “his considerable gifts as a melodist tend to sneak up on you.” Jazztimes added that Malaby is, “a hero of today’s improvised music scene”. This outpour of praise is unsurprising given the number of projects which Malaby has been involved with since his arrival in New York in the early-1990s. In recent years, Malaby has led and recorded many of his own projects–his Tamarindo Trio with Nasheet Waits and William Parker, TubaCello with John Hollenbeck, Chris Hoffman and Dan Peck and Palomo Recio with Ben Monder, Eivind Opsvik, Nasheet waits. Malaby is also a stalwart sideman and has lent his talents to such groups as the Paul Motian Electric Be-Bop Band, Charlie Haden’s Liberation Music Orchestra, Fred Hersch’s Quintet, Chris Lightcap’s Bigmouth, Eivind Opsvik’s Overseas and Ches Smith’s These Arches.

Ben Gerstein is a trombonist and artist from Santa Barbara, California. Based in New York City since 1995, he collaborates with groups and individuals around the world. His music and works explore influences of nature, composition, culture and art through improvisation, performance, multi-instrumental and mixed-media practices.

Trumpeter/Composer Ralph Alessi was born in San Francisco,CA, the son of classical trumpeter Joe Alessi and opera singer Maria Leone. After taking degrees in jazz trumpet and bass—he studied under the legendary Charlie Haden at CalArts—he lit out for New York, where he swiftly became an ubiquitous presence on the downtown scene. He’s been a frequent collaborator with such notable musicians as Steve Coleman, Jason Moran, Don Byron, Ravi Coltrane, Fred Hersch, Uri Caine, and Marc Copland. Alessi has recorded nine albums of original compositions which draw on everything from post-bop to neo-classical music. He currently records for the ECM record label including his 2016 release Quiver. As an educator, Ralph is an Assistant Professor of Jazz Studies at the University of Nevada- Reno as well as the director of the School for Improvisational Music.

Jacob Sacks is a pianist, composer, and educator who has been a mainstay of New York City’s creative music scene for over 20 years. He has been hailed as “a pianist of exploratory temperament, drawn to open space and shrewd irresolution” by Nate Chinen in the New York Times. Known for his creativity, ingenuity, and musicianship, Mr. Sacks has been heard in a wide variety of settings ranging from the open approach of Paul Motian’s groups to the mainstream jazz traditions of the Mingus Big Band to the eclectic world of the Hank Roberts Sextet. His new album, “Fishes,” was released in September on Clean Feed Records and features Ellery Eskelin, Tony Malaby, Michael Formanek, and Dan Weiss.

John Hébert, bassist, was born in New Orleans, Louisiana and currently resides in New York City, where he has become a highly in-demand bassist. He has worked alongside such artists such as Andrew Hill, Lee Konitz, Paul Bley, John Abercrombie, Kenny Wheeler, Paul Motian, David Liebman, Uri Caine, Greg Osby, Bill Stewart, Marc Copland, Fred Hersch, Benoit Delbecq, Maria Schneider, and many others. He has received high praise for his compositions and individual playing style. In 2011 John won the Downbeat Jazz Critics Poll as “Rising Star Acoustic Bassist.” Since then, he has released 4 recordings under his own name. For the Clean Feed label, “Spiritual Lover” and “ Floodstage”. On Firehouse 12 records, “Byzantine Monkey” and his latest release on Sunnyside Records, “Rambling Confessions”.

A native of NYC, Eric McPherson came to prominence apprenticing with legendary saxophonist and educator, Jackie Mclean, and innovative pianist and composer Andrew Hill. Those foundational experiences cultivated Eric into one of the leading drummers in contemporary creative music. Eric continues the legacy of the musical giants who came before him. As well as performing and teaching internationally with an array of today’s leading contemporary creative musicians, Eric teaches privately and at the University of Hartford’s, Jackie Mclean institute.