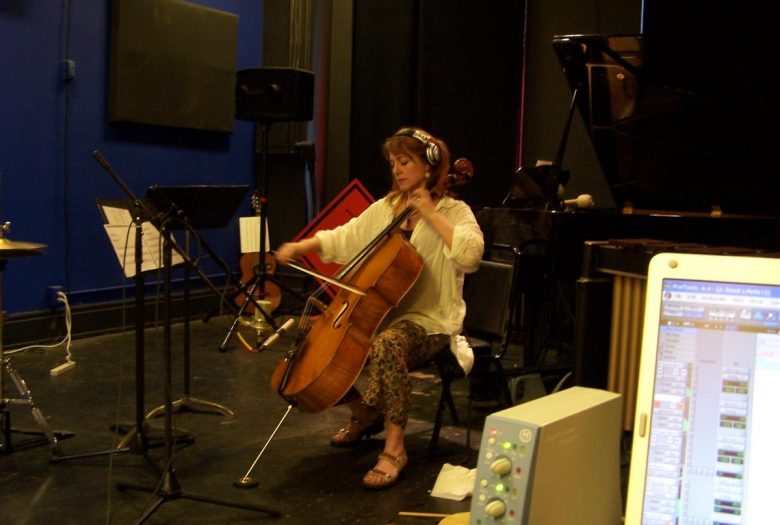 The Music of Toys: Some Early Influences? Kinney is currently being whirled through this aural landscape by the tornado that is her infant daughter. This sometimes engrossing, sometimes annoying, sometimes night-gallerish sonic world is jogging her memory causing some aural flashbacks and blackouts. Her performances, incorporating sampled, processed and real-time toys, as well as a few conventional “musical” instruments will piece together a musical through-line between the early sonic influences of toys during her own baby-hood to her present mode of play. With Jason Hwang, violin and Stomu Takeishi, electric bass… Bring the kids!

Michelle Kinney‘s career began in Minneapolis, MN, when she returned home after receiving a BA in music from Northwestern University. During this early phase in her career, she was recognized and frequently funded as a composer & cellist, collaborating with Twin Cities choreographers (Laurie Van Wieren), filmmakers (Chris Sullivan, Chicago) and theater artists (Michael Sommers), in addition to composing for her own new music ensembles (IMP ORK, Aphid Bloodbath Consort). In 1989, she moved to New York City to pursue an MA in Performance Studies at New York University. Michelle lived in NYC for 13 years, recording and touring Europe and the US with several of her mentors; bridging musical genres and scenes, from art music (Henry Threadgill, Butch Morris, Myra Melford), to pop (Sheryl Crow, Natalie Merchant, Lou Reed); and composing for dance (Cyrus Khambatta), film (Debra Dickson) and theater (Richard Schechner).

Michelle returned to the Twin Cities in 2002, to raise her young family. In addition to again becoming very actively engaged in the community as a composer and performer, Michelle is the Musician in Residence for the Dance Program within the University of Minnesota’s Theater Arts and Dance Department. In this perfect “day job” for a musician/composer, Michelle improvises compositions in daily dance classes, with her cello played through a looping device. Each day Michelle spends hours reading bodies in motion as if they were sheet music, spontaneously creating and layering multiple cello parts, starting from a rhythmic foundation and building harmony, texture and melodic phrasing. —Bio as of 2019