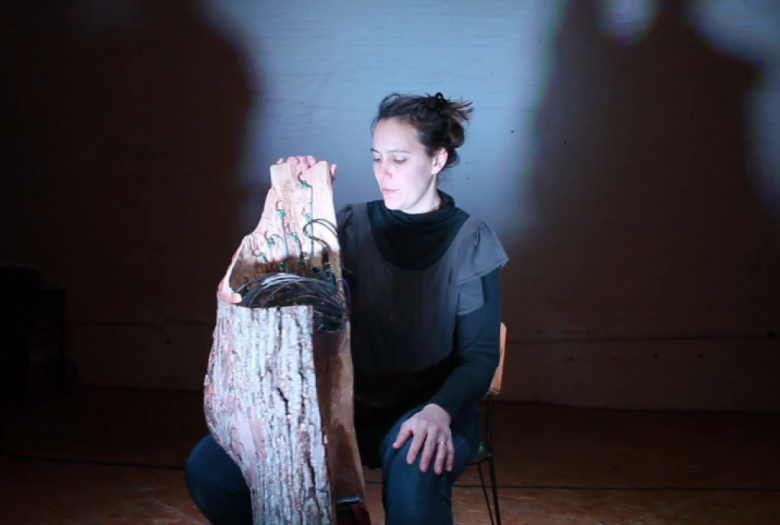 Often described as an aura or ‘aetheric body’, the presence of significant electrical activity or intangible matter beyond the borders of the physical body has been recognized and extensively studied by scientists, philosophers, religious practitioners, spiritualists, near-death-experience alumini and students of the occult. Drawn to this aether like a moth to a lamp, composer/performer Michelle Nagai presents Synthetic Hand Holding, the latest in her series of performance installations collectively entitled Sitting Pieces. She is joined for the evening by video artist Ursula Scherrer. With the invitation to get wired up and reach out and touch someone, audience members will travel with Nagai and Scherrer on an intimate audio-visual journey through the revolving door of mind/matter into the land of mists and vapors.

Brooklyn-based composer Michelle Nagai utilizes sound, physicality and concept to create site-specific performances, installations, radio broadcasts, dances and other interactions that address the human state in relationship to its setting. Recent creative projects incorporate through-composed and improvised music for acoustic instruments and electronics, as well as natural environments, found objects, video, costumes, texts and structures fabricated from a variety of media. In addition, she has developed a number of web-based projects centered on the topic of soundwalking. Nagai’s work has been presented throughout the US, Canada and Europe. She has been supported by the American Composers Forum, Eyebeam, Harvestworks, the Jerome and McKnight Foundations, Meet the Composer and Rensselaer Polytechnic Institute. Nagai is a founding member of the American Society for Acoustic Ecology and holds a teaching certificate from the Deep Listening Institute.

Ursula Scherrer is a video artist and photographer living in New York. Her videos have been shown in festivals and galleries internationally and she had solo shows with her photographs at the Kentler International Drawing Space and at Studio Five Beekman. Scherrer is part of the international artist group Biwak which meets annually in isolated locations to focus on art. Scherrer’s work has been shown at the New York Video Festival 2004, BAC 36th International Film and Video Festival, Brooklyn Museum of Art, at the Chelsea Art Museum, at Rencontres Internationales Paris/Berlin, Dissonanze Festival in Rome, 9e Biennale de l’Image en Mouvement, Saint-Gervais Geneve, Galerie Rachel Haferkamp, Cologne, among others.