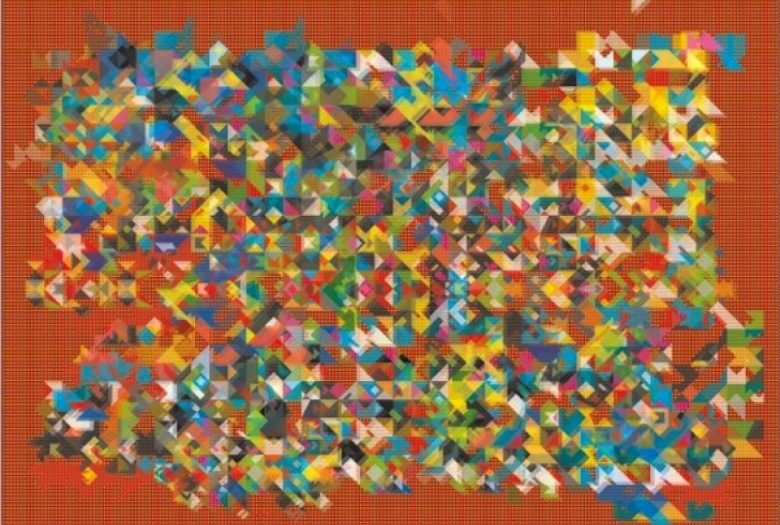 Backbreakerneckbrace is Michael and Dawn Haleta. They have worked together for over a decade creating an elaborately designed and highly detailed body of audio visual based work.

“The forces which hold the elementary parts in a certain orderly relation to each other are not derived from the affinities of just a few kinds of units, but arise from the interactions of very numerous active entities”.**

Backbreakerneckbrace animations are a conglomeration of micro and macro-based sonic and visually entangled events. At times the work may be auditorially and visually fierce and abrasive while at other moments passages hinge on comedy and playfulness. Time-based grids, drawings and graphs play an integral role in the initial shaping and overall composition of each piece. Highly detailed drawings on graph and watercolor paper assist in the audio and visual structuring and development of there animations and enable them to work simultaneously together.

Through harnessing both pen and paper, computers and stop animation, Backbreakerneckbrace create their own unusual A/V events. There animations become interpretations of events occurring within and outside of there environments. Each piece utilizes texture, object and color systems and repetition to reference structures, city grids, the flow of urbanized areas, etc. as well as the unconscious world embedded within our imagination. Their animations take a colorful approach composed directly by their hands, ears, eyes, pen and paper.

Dawn Haleta is an artist from the small coastal town of Atlantic Highlands, New Jersey. In 2000 she graduated from the Maryland Institute College of Art in Baltimore, Maryland with a BFA. Dawn has worked with the ever evolving performance group Backbreakerneckbrace for five years. Backbreakerneckbrace is a collaborative effort between Dawn and audio/visual artist Michael Haleta which continually works with collaborators to fully realize their audio visual intentions. In 2002 she co-founded the New No York collective which presented events throughout New York to promote audio and visual artists who did not have a place to show their work. This group has now exhausted itself but while in action it presented artists such as Kevin Drumm, Jim O’Rourke, People Like Us, and Julian Ottavi.

Dawn is interested in time sensitive pieces in which large amounts of information are condensed within intentional time constraints. Multiple movements are packed into one viewing and echoes the layout and structure of a musical score composed as individual movements. Dawn’s interest in the synchronization of video and audio enhances the experience of the viewing. These visual works are designed with an audio component in collaboration with Mike Haleta. The works become animations in which there is no separation between the audio and the visual. Her work is influenced by the weavings of Annie Albers as well as animations by the Canadian artist Norman McLaren.

Dawn has shown her work at numerous shows and events including Tonic, NY, NY, the Bauhaus University, Weimar, Germany, Art Scape, Baltimore, MD and the Whitney Graduate Program, NY, NY. Dawn is currently working towards a degree in sustainable design.

Michael Haleta (born in 1978 in Princeton, NJ) is an intermedia artist living and working in Atlantic Highlands, NJ. He studied the cello from an early age up until the guitar, effects pedals and free form improvisation peaked his interests in the generation of sound. “Everything starts from a dot.”-Kandinsky. Haleta is interested in individual sounds and bits rather than complete things. In terms of visuals, he graduated in 2001 with a BA in information design from the Maryland Institute College of Art (MICA). A list of current visual and audio-based collaborators include: BBNB: Dawn and Michael Haleta, HD: Jeffrey Donaldson/Haleta, Zbigniew Karkowski/Haleta, the Voltage Spooks: Rick Reed/Keith Rowe/Haleta, MATH: Jeremy Sigler/Haleta and 2673 (Kevin Winters)/Haleta. Haleta has worked and/or played together with numerous composers, artists and musicians, including: Paul Neidhardt, Stephan Moore, Shaun Flynn, 2673 (Kevin Winters), Rick Reed, Jeremy Sigler, Keith Rowe, Jason Urick, Kasper Toeplitz, Scott Smallwood, Seth Cluett, Dan Deacon, Zbigniew Karkowski, Jeff Donaldson, Andrya Ambro and more. He has released audio for Alienation, Raw Special Effects (RSE), Carpark, Antiopic and Hoss records. Michael runs the small edition label/autonomous shop, Raw Special Effects (RSE) which is scheduled to release material by EVOL, Peter Rehberg and many others within the year 2010. A small portion of Haleta’s visual research can be viewed here: http://rse.sevcom.com/