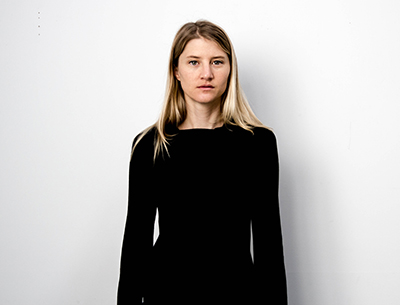 Two performers, one singing and one processing, create a dense palette of sound and imagery derived entirely from voice.

Bioluminescence is a performance by R. Luke DuBois and Lesley Flanigan that explores the modality of human voice. The voice has a unique role in our musical culture, bridging the linguistic and the semiotic in a way that transcends instrumentality through a highly personal embodiment of musicianship. The recorded female voice, in particular, has been the subject of academic investigation following its role in aesthetics (Adorno), cinema and psychology (Silverman) and feminist theory (De Laurentis). In electroacoustic music, the voice has a privileged place in our canon, providing an boundless source of material for sonic exploration from the tape works of Berio, Dodge, and Lansky through the composer-performer repertoire of Joan LaBarbera and Pamela Z. In Bioluminescence, DuBois and Flanigan investigate the possibilities of the improvised voice in tandem with electroacoustic processing. In an intimate and visceral performance, the interplay between the two artists (one singing, one processing) engages the metaphor of the voice as impulse and the computer as filter, creating a dense palette of evocative sounds and images derived entirely from the voice of the singer. Using custom software written by DuBois, Flanigan’s melodic voice is restructured and composed in real time through spectral processing. As the two performers sit across from one another in an apparent “dialogue” of sounds and words, the changing shape of voice is traced through live video, leaving trails that evoke the memory of voice. These visuals act as a immersive sonogram, allowing us to see what is heard in relation to how we are listening.

R. Luke DuBois is a composer, artist, and performer who explores the temporal, verbal, and visual structures of cultural and personal ephemera. He holds a doctorate in music composition from Columbia University, and has lectured and taught worldwide on interactive sound and video performance. He has collaborated on interactive performance, installation, and music production work with many artists and organizations including Toni Dove, Matthew Ritchie, Todd Reynolds, Michael Joaquin Grey, Elliott Sharp, Michael Gordon, Bang on a Can, Engine27, Harvestworks, and LEMUR, and was the director of the Princeton Laptop Orchestra for its 2007 season.

Artist/vocalist Lesley Flanigan’s work, which includes both sound and object-based projects, stems from her interests in the sculptural process of building up and breaking down essential materials, and acoustic relationships between processed and natural sound. With a background in sculpture and more recently in media technology from ITP at New York University, she uses custom built electronics as a way of getting closer to more tangible sound, often using loudspeakers and microphones as musical instruments themselves. Her most recent performance and CD release Amplifications (for voice and speaker electronics), toured nationwide in Fall 2009.