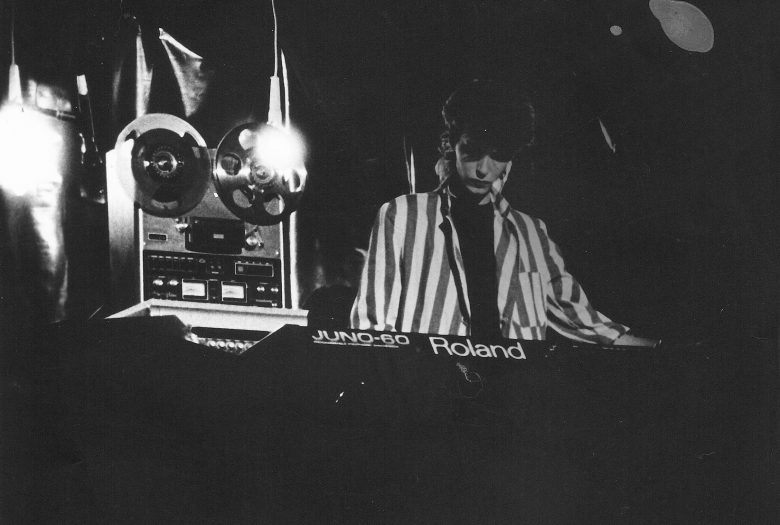 Roulette, with RVNG Intl. and Freedom To Spend, is proud to present minimal synthesist and experimental composer Michele Mercure‘s long-overdue New York City debut. Following the 2017 reissue of her 1986 album, Eye Chant, Mercure celebrates the release of Beside Herself, a collection of her self-produced and distributed cassettes from 1983 and 1990 now reissued on Freedom to Spend. The album charts Mercure’s early experiments with sampling and synthesis, drawing influences from kosmiche and experimental German musician Conrad Schnitzler, and restores the canon of the composer’s arresting dream-music by revisiting her breakthrough material. For the first time in 30 years, Mercure will perform live.

Mercure will share the evening with Shadowlust co-founder Lili Schulder, celebrating the release of her debut album under the alias 51717.

Michele Mercure’s artistic path never ran through creative meccas New York, San Francisco or Los Angeles. Raised in Springfield, Massachusetts, and then moving to Harrisburg, Pennsylvania, in her twenties, Mercure was already an adept musician when she encountered a local and lively theater scene, and was asked to score an unorthodox performance of Waiting for Godot. The experience was pivotal in marrying music and image for Mercure, and so she began making music for film, television, dance, and theater. It wasn’t until a long sojourn in Eindhoven, however, that she became transfixed by electronic music (ala Conrad Schnitzler, whom she would correspond with for years) that would inform her music to come. Through her self-released cassettes, Mercure established her music among like-minded artists abroad. Circulated through tape-trading networks assisted by insightful reviews in Eurock, a seminal music magazine covering progressive rock and electronic music scenes, these album-length releases included Rogue and Mint (1983), A Cast of Shadows (1984), Dreams Without Dreamers (1985), and Dreamplay (1990). Though unvarnished in fidelity (and now scarcely seen), these tapes showcased Mercure’s transportive aptitude within and beyond the limited sound recording medium.

RVNG Intl. is a Brooklyn-based music institution that operates on few but heavily fortified principals, dealing with forward-reaching artists sometimes categorized as electronic, avant, free, fried, fucked, etc. RVNG seeks to appease collector fandom with extravagant packaging and to remind hopeful audiophile generations of the sonic spectacle that transforms the surrounding airspace when needle presses vinyl. Of course, we’re not total curmudgeons, our catalogue is (almost) fully available across digital formats. Their FRKWYS series exemplifies the equilibrium of classic artistic sensibility modern-day sentimentality. Each volume is a unification of progenitor and contemporary musician. Those artists on RVNG working outside the FRKWYS umbrella still find collaboration with the driver. They work closely to activate each new level of artistic accomplishment.

Freedom To Spend examines fully realized yet under-recognized sonic statements from other eras when accessibility to technology did not always equate to accessible music.

The unchecked experimentation in the ‘70s and ‘80s by self-taught musicians on consumer-grade synthesizers, samplers, drum machines and home studios may have often missed academic marks or critical recognition, but were nonetheless revolutionary in spirit.

Freedom To Spend recontextualizes albums made in this mode and on these machines as the artist might envision them being released for the first time. The transmuted presentation collapses / confuses the timeline / narrative and clinical / fetishistic response to listen to music based on its time of origination.

Nostalgia of music from bygone eras blurs the present and slows future imaginations. Freedom To Spend does not “excavate” music for celebrating when it was made, rather recognizes that music from anytime and anyplace can impart knowledge to better understand our present and inspire our future.

Freedom To Spend. Less is more, more or less.

Presented as part of Mixology Festival 2019: Signaling – highlighting artists whose work in sound and media contains embedded truths, both heartening and startling. Active for over 25 years, Roulette’s Mixology Festival celebrates new and unusual uses of technology in music and the media arts. Primarily a snapshot of current activity, the festival strives to reflect both the history and trends of innovation that impact the Zeitgeist. Curated by David Weinstein.

If there is still one hellish, truly accursed thing in our time, it is our artistic dallying with forms, instead of being like victims burnt at the stake, signaling through the flames. — Antonin Artaud

Deep has to do with complexities, boundaries or edges beyond ordinary or habitual understanding. A deep thinker defies stereotypical knowing and it may take either a long time or never to understand her. —Pauline Oliveros