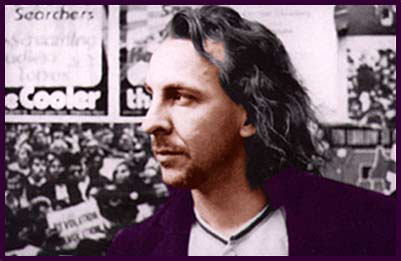 Ostrowski will perform a new multichannel work, “Patterns of Changing Light”, in which he will try to come to terms with various poles of electronic music: texture and gesture, sampling and synthesis, acousmatics and diegesis. In addition, he will play some old chestnuts, and special guests are definitely possible.

Born in New York City, Matthew Ostrowski has been active since the early 1980s, working in improvised music, music theater, electroacoustic composition, and audio installations. An unreconstructed formalist with a continuing interest in density of microevents and rapid change, he has wasted much of the last ten years developing interfaces for real-time musical performance, attempting to emulate the multidimensionality and flexiblity of acoustical instruments in the electronic domain.

He has performed with a boatload of international improvisors, and is currently most active as one half of KRK, with contrabassist George Cremaschi, whose CD ‘Cement’ will be released in March; and as one third of the a/v trio Fair Use, specializing in sped-up interpretations of film classics. He has also worked as a composer/live processor/technical advisor to Elizabeth Streb, Shelley Hirsch, the Flying Karamazov Brothers, Diamanda GalÃ¡s, and many others.

Ostrowski’s work has been seen or performed on four continents, including the Wien Modern Festival, the KrakÃ³w Audio Art Festival, Sonic Acts in Amsterdam, PS 1 and The Kitchen, the Melbourne Festival, and Unyazi, the first festival of electronic music on the African continent. He received the NYFA Fellowship for Computer Arts in 2001, a Radio and Sound Art Fellowship from the Media Alliance in 2000, and was a nominee for the 2006 Alpert Award in the Arts. He has appeared on over a dozen recordings.