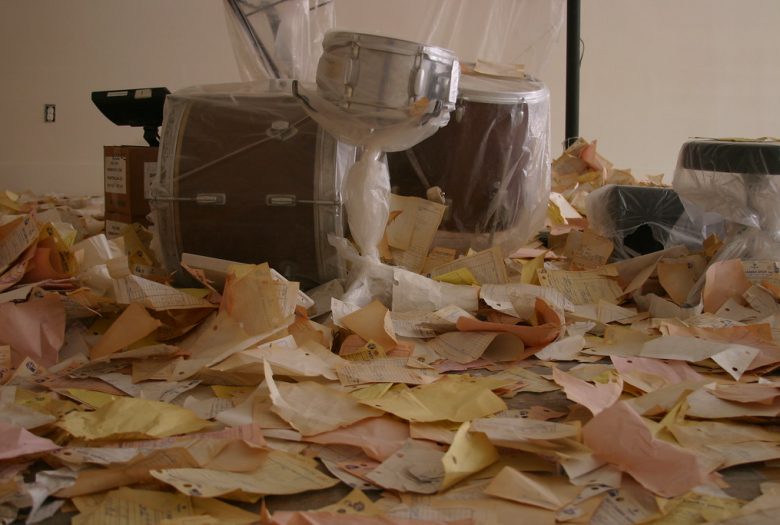 The Harmonic Center Of The Universe

In a darkened room, a large luminous orb pulses amid radial tendrils of audio-responsive LED’s. Sounds and colors unfold an abstract narrative in which senses and forms are united in a gradual arc of elemental tones and visual rhythms. Cascading patterns of color and melody flow throughout the installation space as video paintings are projected from within the luminous orb.

Jesse Stiles (b. 1978, Boston, MA) is a new media artist, musician, and designer of electronic systems. Through the adaptive misuse of emerging digital technologies, Stiles creates works that are simultaneously entertaining, disorienting, immersive, and transcendental. Stiles’ performances and generative installation work engage with and deconstruct a number of populist formats including electronic dance music, narrative cinema, and the “light show” – pushing these mediums into realms both sublime and subliminal.

Stiles’ work has been exhibited and performed nationally and internationally at institutions including Ars Electronica (Linz, Austria), Lincoln Center (NYC, USA), Eyebeam (NYC, USA), Rencontres Internationales (Paris/Berlin/Madrid), and the American Land Museum (various sites, USA). Stiles has also produced a number of site-specific performances in unconventional sites such as “Topics in Advanced Facemelting,” a light and sound performance in one of the United States’ few remaining gasholder buildings (Troy, NY), and “Deja Rendez Vous” a performance on a floating video stage adrift in the Buffalo Bayou (Houston, TX).

Olivia Robinson is an installation artist, using photography, weaving, video, inflatable sculpture, multi-media and circuitry. She views installation and performance as mediums for connections between people and communities across boundaries and history. After earning her BFA in fiber art from the Maryland Institute College of Art, she received a MFA in electronic art from Rensselaer Polytechnic Institute. Robinson has been awarded several residency and research fellowships, at such places as the Center for Land Use Interpretation in Wendover, Utah, the Atlantic Center for the Arts in New Smyrna Beach, Florida, the Global Arts Village in New Delhi, India, and the Tasara Weaving Center in North Beypore, India. She was awarded the Trudy Morse, Malcolm S. Morse Award for new media in 2005. Her exhibition and performance record includes the Baltimore Museum of Art, the WPA/Corcoran Museum, the American Visionary Art Museum, the Museo d’Arte Provincia di Nuoro in Sardegna, Italy, the Albany Symphony Orchestra, the Center for Photography at Woodstock, Performa 05 at PS1, and the 2005 and 2007 Boston Cyberarts Festivals.