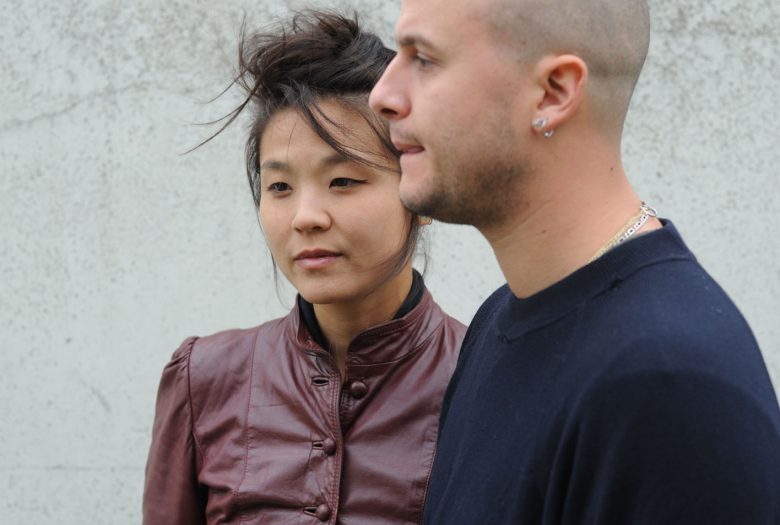 KAMAMA in Cherokee means both elephant and butterfly. There is no overlap in meaning other than the supposed resemblance of the long trunk and flapping ears to the proboscis and wings of that insect. This duo loosely embodies elements of this kind of disparate
pairing. Chen and Marini combine the raw energies resultant from and continuously growing out of their respective histories and experiences. Since their first encounter in early 2010 and after playing fifty some concerts all across the US and europe, they have
been forming a new language which steadily deepens, evolves, converges and exposes their inherent similarities and striking differences. It is ecstatic music. It is contrary music. and at times, they depart completely from one another as two distinct creatures, but then are drawn back into the fold of an undeniable tenderness and comprehension.
www.myspace.com/kamamaband

AUDREY CHEN is a Chinese-American musician who was born into a family of material scientists, doctors and engineers, outside of Chicago in 1976. Parting ways with the family convention, she turned to the cello at age 8 and voice at 11. After years of
classical and conservatory training in both instruments, with a resulting specialization in early and new music, she parted ways again in 2003 to begin new negotiations with sound in order to discover a more individually honest aesthetic. Now, using the cello, voice and analog electronics, Chen’s work delves deeply into her own version of narrative and non-linear storytelling. A large component of her music is improvised and her approach to this is extremely personal and visceral. Her playing explores the combination and layering of a homemade analog synthesizer, preparations and traditional and extended techniques in both the voice and cello. She works to join
these elements into a singular ecstatic personal language.

LUCA MARINI (1982) is a German/Italian drummer who has traveled to and lived in a multitude of places around the world. After studying drums at conservatories in Paris, Montreal, Amsterdam and New York, he continued to develop his own method and
techniques while living in Berlin. Due to this diversity in his personal history, he speaks over four languages and his approach to music is also distinguished by this fluency and ability, to move freely between and synthesize various styles. Utilizing the standard drum
kit as a foundation, Luca incorporates traditional drum techniques, various objects and preparations to achieve a wide spectrum of textures, timbres and sounds.