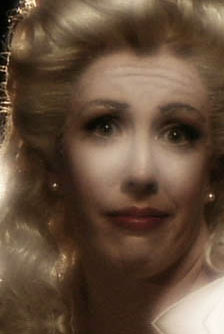 For the score to Toni Dove’s Spectropia, an interactive media event set in a possible England in 2099 and in New York City in 1931 after the stock market crash, composer Sharp created two different noir sound-worlds: for the future, one of distressed computers and tortured guitars; for New York 1931, one based on an imagined meeting of the musics of Duke Ellington and Edgar Varese. The song “This Time That Place” appears in various versions heard throughout the film: as a tango, as a feedbacked guitar solo, as a swing tune, a classical piano etude and as a rock ballad sung on the Neos CD. The Neos CD also included The Sirius String Quartet (Jennifer Choi & Ester Noh – violins, Ron Lawrence – viola and Tomas Ulrich – cello).

Barbara Sukowa is known for her performances onstage and in some of the most iconic films of the New German Cinema with directors such as Fassbinder and von Trotta. She has also developed a career as a classical music narrator and singer and is the lead singer of the band the X-Patsys, which she founded with visual artists Jon Kessler and Robert Longo.

The musicians of The ’31 Band, all of whom have extensive experience in many realms of music, have worked with Sharp on many projects, from the various Western traditions of jazz and classical music to the farthest reaches of contemporary music, free jazz, and improvisation. For this performance, The ’31 Band will include E# playing Bb & bass clarinets, tenor saxophone, guitar & computer processing; Briggan Kraus – alto saxophone; Nate Wooley – trumpet; Art Baron; Curtis Fowlkes & Steve Swell – trombones; Anthony Coleman – piano; David Hofstra – string bass; and Don McKenzie – drums

“Sharp’s compositions, which often evolve through repetition and micro-variation, mirror mathematical processes, but don’t sound dryly scientific. Sharp is interested in discovery, and similar to the way math attempts to capture the nature of the world through the study of patterns and deduction, Sharp’s music seeks musical truth by extracting the essence of a musical concept and exploring it through various perspectives. “Spectropia Suite… features mosaics of noise, string quartet pieces, dark and alluring jazz piano solos, and music for large ensemble, with growling blues riffs reminiscent of the Fletcher Henderson band or the early Duke Ellington orchestra… a wide-ranging tour through jazz, contemporary concert music, and avant-garde noise, three main facets of Sharp’s work as a musician over the last 30 years.”