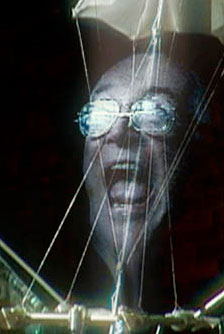 A live-mix cinema event, a scratchable movie performed by Toni Dove and project software designer R. Luke DuBois: video DJs playing a movie instrument. Spectropia is a sci-fi hybrid featuring time travel, telepathy, and elements of film noir in a drama set in England, 2099 and in New York City, 1931, following the Great Crash. Live performers orchestrate onscreen characters through a mix of film, performance, and a system of motion sensing that serves as a cinematic instrument, creating a narrative form that is part video game, part feature film, and part VJ mashing. The audience sees through characters eyes, hears their interior thoughts, and virtual characters break the wall speaking live to the audience .. anything can happen!

The film’s cast features the actress Aleksa Palladino (Boardwalk Empire, Sidney Lumet’s Before the Devil Knows You’re Dead and Find Me Guilty) as Spectropia and Helen Pickett (recently with the Forsythe Ballet of Frankfurt and The Wooster Group) as Sally. Elliott Sharp composed the original score. Debbie Harry sings the vocals on the song “This Time, That Place.” The artist Perry Hoberman contributed to the set design for Spectropia’s studio with an interactive installation of used computer equipment. R. Luke DuBois, artist and co-author of the Jitter software suite for real time manipulation of matrix data designed the project’s proprietary software.

To find out more about the show, see blog posts with photos, video clips and backstory at :

“Visually stunning…dazzling” “¨”Fans of offbeat cinema or science fiction might find aspects of Spectropia intriguing, because moments suggest an eerie blend of The Big Sleep, Brazil and La Jetee.” “¨”Shifting eras and moods are powerfully evoked by the design, from the rich cinematography and costumes to Elliott Sharp’s eclectic soundtrack.”

“The future of cinema?”

“Ms. Dove, together with co-performer and software engineer R. Luke DuBois, employs her “rig” to present “Spectropia,” an interactive film as immersive for its two real-time performers as it is for the audience. “¨”The multilayered presentation of “Spectropia” is…unlikely to sound or appear familiar to anyone who hasn’t already witnessed it-or to anyone unfamiliar with Ms. Dove. Since the early 1990s, the artist has explored the intersection of narrative experience and audience participation through complex, interactive installations aided by advancing technology.