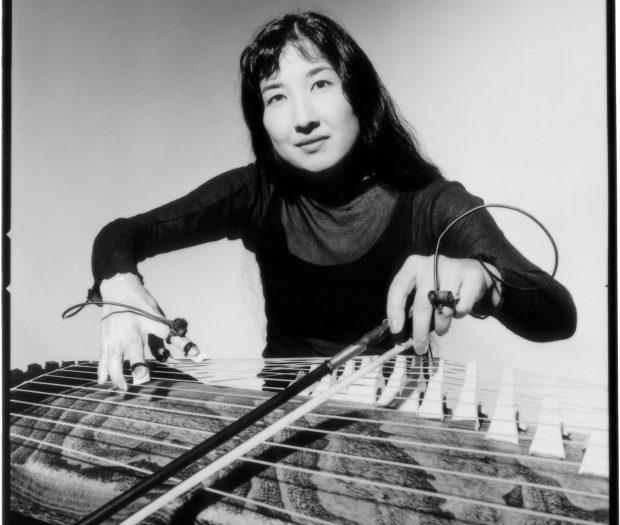 Miya Masaoka will be performing on koto, computer and Laser Koto and premiering Pieces for Plants #8, with several plants on stage, whose physiological response is made audible through medical electrodes and computer. In addition, she will premier Detritus, an interactive piece for rocks, gravel, sand, koto and video.

Masaoka resides in New York City and is a classically trained musician, composer and sound/installation artist. She has created works for solo koto, laser interfaces, laptop and video. She also has made works for sculpture installations and written scores for ensembles, chamber orchestra and mixed choirs. In her pieces, she often works with the sonification of data, and maps the behavior of brain activity, plants and insect movement to sound.

Her work has been performed throughout the world, at events and venues including the Venice Biennale, Merkin Hall, Miller Theater, V2 (Rotterdam), IRCAM (Paris), KunstRadio (Vienna), Radio Bremen, Yerba Buena Center for the Arts, Le Centrale (Canada), and at festivals including Moers (Germany), Victoriaville (British Columbia), the London Musicians’ Collective’s Festival of Experimental Music, the Other Minds Festival, Bang on a Can at the Henry Street Settlement and the Santa Fe Electro-Acoustic Music Festival. She currently is a professor in the Music/Sound department at the Milton Avery School of the Arts MFA Program at Bard College, NY.