Morton Subotnick & Lillevan – From Silver Apples of the Moon to a Sky of Cloudless Sulphur IV: LUCY 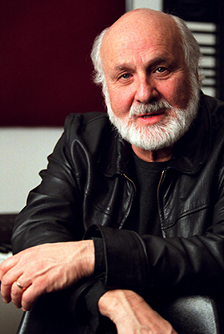 Morton Subotnick & Lillevan – From Silver Apples of the Moon to a Sky of Cloudless Sulphur IV: LUCY

A performance collaboration between electronic music pioneer Morton Subotnick and video animation artist Lillevan, From Silver Apples of the Moon to a Sky of Cloudless Sulphur IV: LUCY is the latest iteration of an ongoing series of works that combines live improvisation and Subotnick’s interest in research and development of new instruments and technology.

For each season of performances I create a new hybrid Ableton-Buchla “instrument” loaded with prepared samples from all my previous works and performances and new patches that will allow me to modify the samples while performing brand new sound gestures created especially for the new season. The work always has the same title, From Silver Apples of the Moon to a Sky of Cloudless Sulphur IV: LUCY. The “IV: LUCY” refers to the season number and the name given to the newest materials. –Morton Subotnick

Morton Subotnick is one of the pioneers in the development of electronic music and an innovator in works involving instruments and other media, including interactive computer music systems. The work which brought Subotnick celebrity, Silver Apples of the Moon [1966-7], was commissioned by Nonesuch Records, marking the first time an original large-scale composition had been created specifically for the disc medium: a conscious acknowledgment that the home stereo system constituted a present-day form of chamber music. It has become a modern classic and was recently entered into the National Register of Recorded Works at the Library of Congress. Subotnick is also pioneering works to offer musical creative tools to young children, including his iPad App Pitch Painter. He is the author of a series of CD-ROMs for children, a children’s website [www.creatingmusic.com] and developing a program for classroom and after school programs that will soon become available internationally. He tours extensively throughout the U.S. and Europe as a lecturer and composer/performer.
mortonsubotnick.com

Lillevan is an animation, video and media artist. He is perhaps best known as founding member of the visual/music group Rechenzentrum (1997-2008). He has performed and collaborated with many artists from a wide array of genres, from opera to installation, from minimal electronic experimentalism to dance and classical music. Lillevan has performed and exhibited all over the globe, and has performed at all the major media festivals. Since the mid-nineties he has investigated non-narrative facets of film, this has lead to completely abstract works, but also to collage explorations of film history, to interactive works for dance groups and much more. The focus is often on the musicality of the imagery, thus defining the moving imagery as an instrument in its own right as opposed to accompanying music. Intensity and texture are more important than narrative and figure, the relationships between the image’s elements and the viewing eye, between the eye, the mind and the soul are explored, the world of media archaeology is of major interest, while questioning viewing habits and manipulative image-creation.
lillevan.com