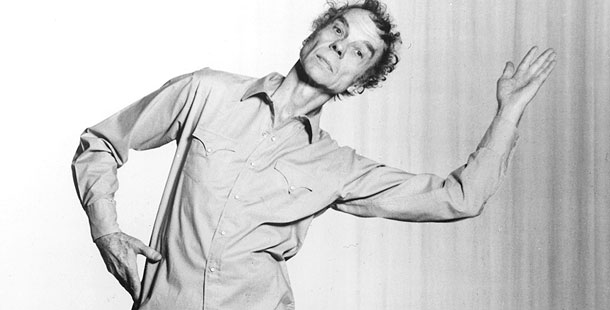 NO MORE RSVPs! There will be a limited number of tickets at the door.

“Dancer and choreographer Merce Cunningham (1919 – 2009) has been a decisive force in the creation, dissemination, and survival of contemporary music since the mid-1940s,” Amy C. Beal

The Music Committee of the Merce Cunningham Dance Company (MCDC) will present two one-night-only concerts on Sunday, March 20, 2011, to celebrate the release of “Music for Merce,” a 10-CD boxed set from New World Records. From 5 – 7 and from 8:30 – 11 pm, the concerts offers a once-in-a-lifetime opportunity for audiences to witness the remarkable breadth and vitality of the musical community-from John Cage to David Tudor, Takehisa Kosugi, and generations of experimental musicians-that played a critical role in Merce’s life and work.

Noted music scholar Amy C. Beal, whose essay accompanies the boxed set, and David Vaughan, archivist for the Cunningham Dance Foundation, will also speak during the evening about Merce’s influence and relationship with new music.

The program for the 8:30 concert is as follows:

Miguel Frasconi uses electronics and a menagerie of glass objects to create his sound world. He had the honor of working closely with John Cage starting in the late 1970s. He presently teaches electronic music at Bard College and performs with the new music ensemble Ne(x)tworks.

George E. Lewis is the Edwin H. Case Professor of American Music at Columbia University. The recipient of a MacArthur Fellowship in 2002, an Alpert Award in the Arts in 1999, and fellowships from the National Endowment for the Arts, Lewis’s work as composer and improvisor includes electronic and computer music, computer-based installations, and notated and improvisative forms, and is documented on more than 130 recordings. His widely acclaimed book, A Power Stronger Than Itself: The AACM and American Experimental Music (University of Chicago Press, 2008) was a 2009 recipient of the American Book Award.

Shelley Burgon is a multi-instrumentalist who is best known for her improvisational work blending an acoustic harp with a laptop in a way similar to that of traditional extended harp techniques. She is a member of the chamber group Ne(x)tworks, as well as the bands Family Dynamics and MERCE, and in May 2009, Burgon premiered a new piece for the Merce Cunningham Hudson Valley Project at Dia:Beacon.

Ikue Mori moved from Tokyo to New York in 1977. She started playing drums, then drum machines and collaborated with numerous improvisers throughout the US, Europe, and Asia, while continuing to produce and record her own music. Since 2000 started using laptop computers to expand her vocabulary, not only performing sounds with them but creating visual work as well.

Alvin Curran has realized a long and fruitful career as a composer/performer/ installation artist, writer and teacher in the American experimental music tradition. Born in Providence in 1938 he studied with Ron Nelson, Elliott Carter and Mel Powell, co-founded the group Musica Elettronica Viva in 1966 in Rome where he currently resides. More info at:
alvincurran.com

Fast Forward is a New York artist who works with aural, visual and sensual media. He toured extensively as a musician with The Merce Cunningham Dance Company from 1994-2009. He recently presented his group works “Typhoon Shelter” in Hong Kong and “Musique a la Mode” in Berlin. In the 1970’s, he studied with Robert Ashley and David Behrman. Forward is an advisor for the UMAMI food & art festival in New York and a regular guest professor at Kunstakademiet Bergen in Norway.
www.mrfastforward.com

Chicago born, NYC based Matana Roberts is an alto saxophonist/composer/performer who works in various mediums of improvised sound and performance, and has been active in New York since 2001. A Vanlier and Brecht Forum fellow, as well as a 2008 and 2009 nominee for an Alpert Award in the Arts, she has appeared as a collaborator on recordings and performances worldwide with her own ensembles as well as with a wide variety of collaborative ensembles that span many sound genres. Her most recent recording is Matana Roberts: Live in London on Britain’s Central Control International.

Marina Rosenfeld is an artist and composer based in New York. Her works, ranging from sound installations and site-specific performances to live turntablism, have been widely commissioned by institutions including the Whitney Biennial, the Holland Festival/Stedelijk Museum, Performa Biennial, Wien Modern, the Liverpool Biennial, Tate Modern, and many others. Upcoming projects in 2011 include new works for the Museum of Modern Art in New York, the Serralves Museum in Porto, and Ensemble neoN in Oslo. Rosenfeld has been a member of the faculty at Bard College since 2003, and co-chair of its MFA program in Music/Sound since 2007.