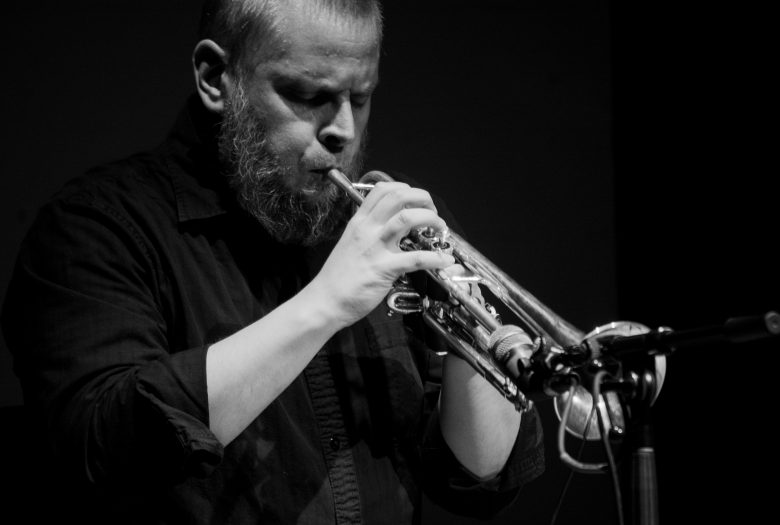 Mutual Aid Music is the extension of a compositional project of trumpeter Nate Wooley begun in 2014. Called Battle Pieces, the initial concept was to find an architecture within which four jazz musicians could push themselves out of their concretized musical languages and philosophies to come up with new ideas on the spot. Initially, Wooley wrote 20 small pieces of musical material. Three members of the quartet would blindly choose one of the pieces as their sole musical information to deal with for the piece. These players would then fit together their material in real-time by transposing, stretching, compacting, fragmenting or elaborating upon it to make a musical texture that made sense to them. The fourth member, then, freely negotiates that texture with no musical material to fall back upon.

Mutual Aid Music is the next step in this evolution. Most obviously, the group has been expanded into a double quartet of sorts by adding four musicians with a deep improvisational background coming out of new music, as opposed to jazz. The group of compositions expanded as well, reaching almost 100 for this recording. But, most importantly, the way in which the players were allowed to interact evolved away from the, somewhat combative, nature of Battle Pieces as everyone tried to negotiate the unknown, to a music that is an attempt at reconciliation and cooperation.

This performance will be presented virtually and available for free on a variety of streaming platforms. Roulette’s theater is currently closed for public performances as a result of the Covid-19 pandemic and the safety measures that Roulette has put in place to keep staff, artists, and the public safe.

Nate Wooley grew up in Clatskanie, Oregon. He began his professional music career at age 13 performing in big bands with his father, and studied jazz and classical trumpet at the University of Oregon and University of Denver. He settled in New York in 2001, and maintains an active schedule in jazz and experimental music in the U.S. and abroad.

Mr. Wooley works in contemporary classical, jazz, noise, and electronic music as an interpreter, improviser, and composer. While a large part of his work has consisted of solo improvisation and composition, he has collaborated with Anthony Braxton, Éliane Radigue, Annea Lockwood, Yoshi Wada, Christian Wol , Wadada Leo Smith, and others. He was a 2016 recipient of a Grants to Artists award in Music / Sound from the Foundation for Contemporary Arts and made his premiere as a soloist with the New York Philharmonic in 2018.