Ned Sublette “Kiss You Down South” 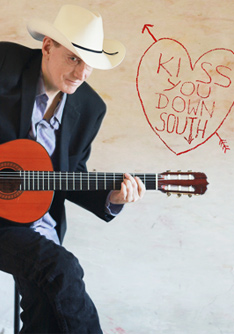 Ned Sublette “Kiss You Down South”

To mark the forthcoming release of KISS YOU DOWN SOUTH, his first album in over a decade, Ned Sublette is giving an exclusive solo concert performance of the album’s songs at Roulette.

KISS YOU DOWN SOUTH is a stripped-down, 100%  solo album made at New Orleans’s Piety Street Recording. Produced by Ned Sublette with longtime colleagues Peter Gordon and Mark Bingham, it was conceived as “something I could sit down and do live without anyone else, just me and my guitar,” Sublette  says, “something I could reproduce or surpass on stage.”

Since he quit bandleading in 2001, the New York-based singer-songwriter NED SUBLETTE’s concerts have been solo acoustic performances. This concert will be an intimate experience, as Sublette turns Roulette’s beautiful ballroom-style auditorium into his living room, and makes his guitar into a miniature orchestra. Trained as a classical guitarist, the album is, he says, “a duet between me and my guitar,” a Ramírez that he bought new as a student in 1969 and which has been his primary guitar ever since.

He’s a wicked guitarist who keeps multiple rhythms spinning as he covers multiple vocal parts and sings songs about, inspired by, and having nothing to do with New Orleans. In his book The Year Before the Flood (Lawrence Hill Books), he tells the story of “finding his voice” while living in New Orleans in 2004-05.

Sublette is widely known as the author of The World That Made New Orleans and Cuba and Its Music. But before he was an author, he was a singer-songwriter. His impressive array of achievements includes his 1999 album Cowboy Rumba, in which he sang with four different top-notch Latin bands, including Cuba’s Los Muñequitos de Matanzas and N.G. La Banda, the Dominican Republic’s Ramón Orlando, and a team of New York salseros, and which charted on commercial Latin radio with its extraordinary merengue version of “Ghost Riders in the Sky.” Prior to that, he made two albums with artist Lawrence Weiner and vocal group The Persuasions (Ships at Sea Sailors and Shoes and Monsters from the Deep), and collaborated closely with and played on recordings by Peter Gordon, Glenn Branca, Rhys Chatham, and Arthur Russell. He led his own band that played for years in New York at CBGB, the Lone Star Café, the Pyramid Cocktail Lounge, Tramps, and many other dives.

Sublette made a legendary lost honky-tonk album (“back in the legendary lost ‘80s,” he says) called Sweet Texas Crude, with an all-star country-rock team headed by pedal steel virtuoso Lloyd Maines. Though it was never released, Willie Nelson released his cover version of one song from that album – Sublette’s best-known song to date, “Cowboys Are Frequently Secretly,” which ponders the existence of gay cowboys. “For years,” Sublette says, “people have been saying to me, oh, you’re the guy who wrote that song!” He wrote it in 1981, and it had an underground cult following for almost twenty-five years until Nelson released his version in 2006.

Sublette quit bandleading in 2001, but in recent years, he’s popped up playing solo acoustic gigs at San Francisco’s massive Hardly Strictly Bluegrass Festival, at the New Orleans Museum of Art, at Joe’s Pub and the David Rubenstein Atrium in New York, at Houston’s Continental Club, and doing well-received all-Spanish sets at the Voll-Damm Barcelona International Jazz Festival, as well as in San Francisco, Barranquilla and Santo Domingo. In September 2012 he sang the lead role in Vidas Perfectas, the Spanish-language version of Robert Ashley’s Perfect Lives, at the Serpentine Gallery in London.

In the course of his work as a writer, he’s been a Guggenheim Fellow, a New York Public Library Cullman Center Fellow, a Tulane Rockefeller Humanities Fellow, a Patrick Henry Writing Fellow at the C.V. Starr Center for the Study of the American Experience, and is presently a Knight Luce Fellow for Reporting on Global Religion. This summer he traveled to Angola, and is presently in production on Hip Deep Angola, four one-hour radio documentaries for the public radio program Afropop Worldwide. His forthcoming book, co-authored with Constance Sublette, is The American Slave Coast.