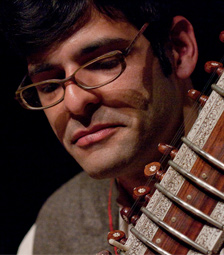 Sitarist Neel Murgai, tabla player Sameer Gupta, and violinist Trina Basu bring Indian classical music to life in performance and participatory fun as they break down the music for kids and adults to understand. They perform a mix of traditional music and original songs that will “color the mind,” which is the literal meaning of raga. Participants will learn to sing Indian solfege, count the mathematical patterns of Indian rhythms and comprehend the freedom and structure that defines raga music.

Neel Murgai is multi-instrumental performer, composer and teacher. He has studied sitar for 17 years, currently with Pundit Krishna Bhatt. He has an MFA in Interdisciplinary Arts from Goddard College. Neel also plays frame drums and practices overtone singing. While dedicated to the study of raga, Neel is also interested in creating a unique cross-cultural music with influences spanning the globe. Neel has worked with a diverse array of artists including Bill T. Jones, Cyndi Lauper, Wyclef Jean, Samir Chatterjee, Thurston Moore, Loren Conners and Sunny Jain. He has performed in theaters and festivals around the world, from the Lincoln Center to the Blue Note and Late Night with David Letterman. His group, the Neel Murgai Ensemble, combines Neel’s sitar with violin, cello and tabla creating a raga chamber jazz. They have a critically acclaimed CD on Innova Records and have been featured on NPR’s Song of the Day. Neel has composed music for the films “The Yes Men Fix the World” and “A Decent Arrangement”, as well as BBC and TBS TV programs. As a teacher Neel has taught workshops at colleges, art centers and throughout New York City schools working for Carnegie Hall’s Global Encounters program.   neelmurgai.com

Sameer Gupta is an original artist within improvisational styles of jazz, world, and fusion music. Since 10 years old, he has lived in Tokyo, San Francisco, New York City, and visited India annually. Today his skills and musicianship are appreciated globally. He has played drumset at Jazz at Lincoln Center, and the Birla Auditorium in Kolkata. He has played tabla at The Lincoln Center, and Asagiri Jam in Japan. Along with lec/dems on Classical Indian music with Carnegie Hall’s Global Encounters Program, and at Berkelee College of Music in Boston, he now plays a hybrid of both tabla and drumset simultaneously, attempting to push the boundaries of possibilities. He has the distinguished honor today of studying with tabla Maestro Pandit Anindo Chatterjee in Kolkata, with his first few years spent under the guidance of the legendary Ustad Zakir Hussain. Sameer can be heard live and on recording with such known artists as Marc Cary, The Supplicants, Anindo Chatterjee, Ramesh Misra, Chitresh Das, Richard Howell, Snehasish Mozumdar, Srinivas Reddy, Prasant Radhkrishnan, Marcus Shelby, Parijat Desai, Stephen Kent, Sekou Sundiata and numerous other fine artists.

A native of Miami, Florida, Trina Basu began playing the violin at the age of six. Growing up, she served as assistant concert-mistress for the Greater Miami Youth Symphony and had the opportunity to perform with them in Panama and Mexico. While receiving a degree in Music Therapy at Florida State University, Trina began studying Indian Classical music with sitarist, Nalini Vinayak as well as jazz improvisation with trumpeter, Longineu Parsons. In 2007, she received an Artist Fellowship to study South Indian Classical violin in Chennai, India with noted violinists Vittal Ramamurthy and Padma Shankar. Her diverse set of musical skills has led her to perform in India, Canada and the US at venues such as Carnegie Hall, Kennedy Center, Lincoln Center, Raga Sudha Hall, Newport Jazz Festival and the Florida Folk Festival, among others. She’s had the opportunity to perform with artists such as Mos Def, Gil Scott Heron, Vittal Ramamurthy, Suphala and at Salman Rushdie’s book launch of the “Enchantress of Florence.” She regularly performs with Adam Rudolph’s Go: Organic Orchestra and Carnatic percussion ensemble, Akshara. As an educator, Trina teaches violin privately and in the Brooklyn public schools through the Noel Pointer Foundation. She is currently receiving training to be a Suzuki violin teacher. Along with her love for performing she also finds great joy in sharing her passion for music with children.