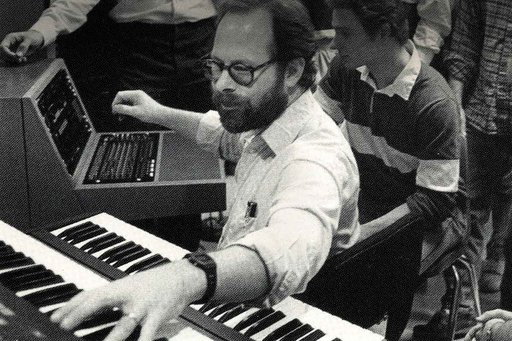 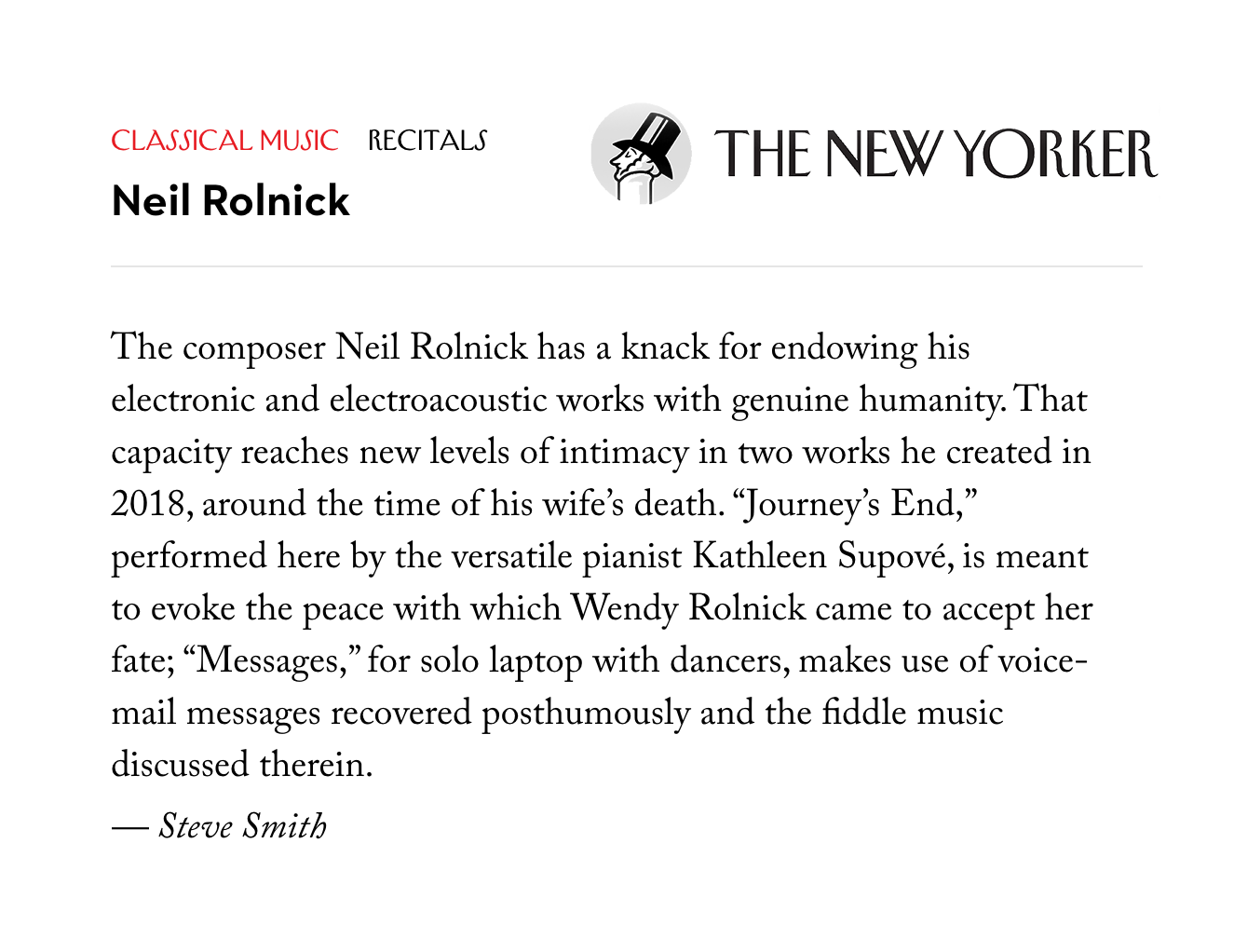 Roulette welcomes electronic and computer music pioneer Neil Rolnick as he presents an evening of deeply personal new work thematically organized around the passing of his wife Wendy in 2018. Journey’s End, a New York City premiere features pianist Kathleen Supové and explores the remarkable peace Wendy achieved toward the end of her life and through her transition to the next. Messages, a solo-laptop piece accompanied by dancers Julia Bengtsson and Mauricio Vera, uses deleted voicemail messages, recovered posthumously, and integrated with the fiddle music they discuss.

On this body of work Rolnick notes: “When my wife, Wendy, was in her final days in the summer of 2018, I promised her I would keep writing and playing music, and that I would bring her with me in my heart wherever that took me, to see new places and meet new people.I’ve been making good on that promise over the last year. The concert features music written in response to Wendy’s loss, but they are not sad or mournful pieces. She fought hard to live and accepted her mortality with grace, buoyed by the love that surrounded her. The music tries to reflect her courage and humor and grace.”

Composer Neil Rolnick pioneered the use of computers in musical performance, beginning in the late 1970s. Based in New York City since 2002, his music has been performed world wide, including recent performances in China and Mexico and across the US. His string quartet Oceans Eat Cities was performed at the UN Global Climate Summit in Paris in Dec. 2015. From 2016 to 2019 he received support from CEC ArtsLink, the Bogliasco Foundation, New Music USA and NYSCA. Throughout the 1980s and ‘90s he developed the first integrated electronic arts graduate and undergraduate programs in the US, at Rensselaer Polytechnic Institute. Though much of his work connects music and technology, and is therefore considered in the realm of “experimental” music, Rolnick’s music has always been highly melodic and accessible, and has been characterized by critics as “sophisticated,” “hummable and engaging,” and as having “good senses of showmanship and humor.” www.neilrolnick.com

Julia Bengtsson is a Swedish dancer and choreographer based in New York. A Gothenburg native, Julia started taking dance classes five years old with Eileen Jones, Principal Dancer with the Gothenburg Ballet. Ms Jones encouraged Julia to apply to the Swedish National Ballet School, where she was accepted. At sixteen Julia moved to Stockholm to continue her studies at the Royal Swedish Ballet School. After her graduation she was accepted as a Scholarship Student at the Joffrey Ballet School. Julia has performed soloist roles at first-class theaters in Sweden, as well as in US, such as The Royal Swedish Opera House, The Gothenburg Opera, and Lincoln Center. Her performances range from classical ballets, to operas, to musicals, to music videos, and she has collaborated with several internationally accaimed photographers. Julia has received significant awards from organizations including Anders Sandrew’s Foundation (2014), Arts Umbrella (2014), Willinska Foundation (2012), Cecilia Rilton Ballet Foundation (2012), F. Barck Foundation (2012), and Carina Ari Foundation (2008). www.juliabengtsson.com

Steve Brodner, a leading artist in the world of political satire and caricature, is a longtime contributor to The Nation. His work has appeared in most major publications in the United States. His web and video work has been featured in The New Yorker, PBS, Slate, and The Washington Spectator. He has won many awards and continues to push political, artistic, and technological borderlines. stevebrodner.com

Jennifer Choi has charted a career that breaks through the conventional boundaries of solo violin, chamber music, and the art of improvisation. Hailed by The New York Times as an “excellent violinist,” “soulful, compelling,” and by Time Out New York as “passionate,” and “adventurous”, Jennifer has performed worldwide in venues such as the Library of Congress in Washington D. C., the RAI National Radio in Rome, Hong Kong National Radio, and the Mozartsalle in Vienna since giving her debut recital at Carnegie Hall’s Weill Hall in 2000. Having gained a significant reputation as “a leading New York new music violinist,” (Boston Globe), Jennifer has pioneered new works and engaging performances to the forefront of today’s contemporary music scene. www.jenniferchoi.com

Mellissa Hughes enjoys a busy international career in both contemporary and early music. A dedicated interpreter of living composers, Hughes has worked closely with Julia Wolfe, Michael Gordon, David Lang, Steve Reich, Neil Rolnick, and has premiered works by David T. Little, Missy Mazzoli, Ted Hearne, Caleb Burhans, Christopher Cerrone, Jacob Cooper, and Frederick Rzewski, among others. In the classical concert hall she has performed Mozart’s Vespers and Requiem under the baton of Sir Neville Marriner, Handel’s Dixit Dominus with Sir David Willcocks, and the role of Dido under the direction of Andrew Lawrence King. Equally at home in front of a rock band, Hughes has received widespread acclaim in her role as lead vocalist of Newspeak, an amplified alt-classical band, and for her work with Missy Mazzoli’s Victoire. mellissahughes.com

Kathleen Supové is one of America’s most acclaimed and versatile contemporary music pianists, known for continually redefining what a pianist/keyboardist/performance artist is, in today’s world. Ms. Supové annually presents a series of solo concerts entitled THE EXPLODING PIANO. In this series, she has performed and premiered works by a list of established and emerging composers that’s a Who’s Who of contemporary music for piano. She has especially championed music of compelling virtuosity and audience connection. The Exploding Piano is a multimedia experience using electronics, theatrical elements, vocal rants, staging, and collaboration with artists from other disciplines. Through her composer collaborations, she has become an integral part of creating a repertory of piano pieces for the modern world. www.supove.com

A native of Chile, Mauricio Vera began his studies in 1998 at “Ballet de Santiago” . Under the artistic direction of Ricardo Bustamante and Marcia Haydée of the “Ballet de Santiago”, He participated in several South America TV productions. In 2006 he continued studying at the “National Ballet of Cuba” of Alicia Alonso and the”Fundacion of Julio Bocca” in Argentina. After moving to the United States he trained at “Steps on Broadway” in NYC. He then worked with “Charleston Ballet Theater”, in South Carolina and with the “State Street Ballet” in Santa Barbara, CA. He performed soloist and principal roles for 6 years.