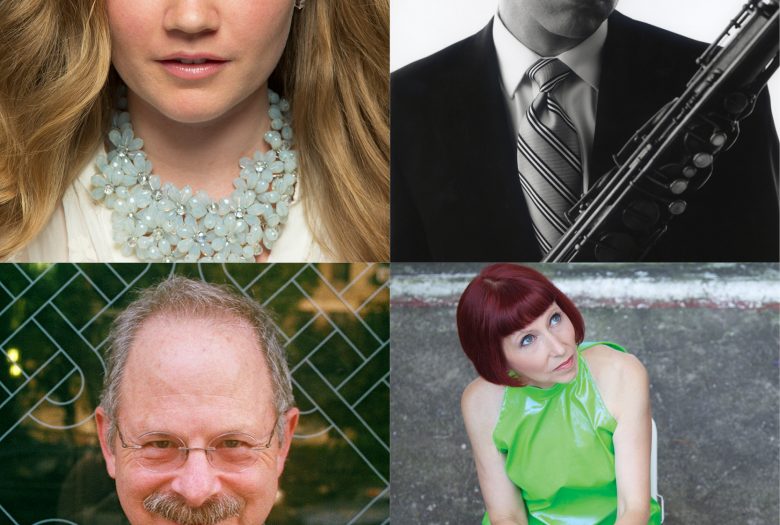 Neil Rolnick premieres two new pieces, Silicon Breath, for alto sax and computer, and Cello Ex Machina, for cello, that both exploits the ability of the computer to take a single line of a melodic instrument and transform it into an orchestral-sized sound world. The instrumental lines are turned into chords, canons, counterpoint and loops which are varied and transformed by the players. Dynamic RAM & Concert Grand surfaced briefly a year ago, and has since undergone considerable revision to enhance the level of control given to the player. In this version, the pianist is armed with multiple iPads and a pedal to manage looping and effects.

All three of these pieces push the technical bounds of the instrument and of the computer. In their musical trajectories through varied moods and styles, and with the inclusion of different improvisational and technical strategies in each of the pieces, they all challenge the player to creatively shape a unique half-hour musical narrative.

Composer Neil Rolnick pioneered in the use of computers in musical performance, beginning in the late 1970s. Based in New York City since 2002, his music has received increasingly wide recognition and numerous performances both in the US and abroad. Rolnick has often included unexpected and unusual combinations of materials and media in his music. He has performed his music around the world, exploring forms as diverse as digital sampling, interactive multimedia, and acoustic vocal, chamber and orchestral works. Throughout the 1980s and ‘90s he was responsible for the development of the first integrated electronic arts graduate and undergraduate programs in the US, at Rensselaer Polytechnic Institute’s iEAR Studios, in Troy, NY.

Though much of Rolnick’s work connects music and technology, and is therefore considered in the realm of “experimental” music, his music has always been highly melodic and accessible. Whether working with electronic sounds, acoustic ensembles, or combinations of the two, his music has been characterized by critics as “sophisticated,” “hummable and engaging,” and as having “good senses of showmanship and humor.”

In 2014 Rolnick completed Silicon Breath for solo saxophone and computer, commissioned by the New York State Council on the Arts, and Dynamic RAM & Concert Grand for solo piano, commissioned by the Fromm Foundation. These pieces, along with a new piece, Cello Ex Machina, for solo cello and computer, will be on a new CD of recent large scale pieces to be released by Innova in 2015. During this period Rolnick also completed the first two of a series of new solo laptop performance pieces, O Brother! and WakeUp, deconstructing recordings by Rolnick’s younger brother and by the Everly Brothers, respectively. 2014 also saw the release of Rolnick’s 18th commercially available recording, The iFiddle Concerto, released digitally by the American Composers Orchestra, featuring violinist Todd Reynolds. www.neilrolnick.com

American cellist Ashley Bathgate has been described as an “eloquent new music interpreter” ( New York Times) and “a rising star of her instrument” (Albany Times Union) who combines “bittersweet lyricism along with ferocious chops”(New York Magazine). Her “impish ferocity”, “rich tone” and “imaginative phrasing” (New York Times) have made her one of the most sought after performers of her time. The desire to create a dynamic energy exchange with her audience and build upon the ensuing chemistry is a pillar of Bathgate’s philosophy as a performer. Her affinity to dynamism drives Bathgate to venture into previously uncharted areas of ground-breaking sounds and techniques, breaking the mold of a cello’s traditionally perceived voice. Most recently Bathgate premiered a new Cello Concerto by Australian composer Kate Moore with the ASKO|Schönberg ensemble at the Gaudeamus Festival in Utrecht, NL. She subsequently recorded an album of Moore’s solo cello works which will be released in June 2015 on Cantaloupe Music. This spring also brings the world premiere of What Moves You, a collaborative performance project with jookin’ dance sensation Lil Buck at the Spoleto Festival USA in Charleston, NC. Bathgate is currently collaborating with the Brooklyn-based composer collective Sleeping Giant, who is writing her a six-movement suite for solo cello to premiere next year on the Metropolis Resident Artist Series in NYC. Her recorded work can be found on Albany Records, Cantaloupe Music, Innova Recordings, La-La Land Records, Naxos, Nonesuch and Starkland. Originally from Saratoga Springs, NY, Bathgate resides in New York City. www.ashleybathgate.com

Composer and multi-instrumentalist Ted Nash was born in Los Angeles into a musical family – his father Dick Nash and uncle Ted Nash are both well-known jazz and studio musicians. Nash first came to New York at the age of eighteen and soon after released his first album as a leader, Conception (Concord Jazz). During his first three years in New York he became a regular member of the Gerry Mulligan Big Band, the National Jazz Ensemble, and the Mel Lewis Jazz Orchestra, the latter an association that would last for more than ten years. Nash’s CDs have received many awards, including top ten CDs by New York Times, Village Voice, Boston Globe, New York Newsday, The New Yorker, Downbeat, and Jazz Times Magazine. Nash has been cited as “rising star” on saxophone for several years in the Downbeat Magazine Critics Poll. Nash has also won three SESAC National Performance Activity Awards for the success of the CDs on the radio. www.tednash.com
Kathleen Supové is one of America’s most acclaimed and versatile contemporary music pianists, known for continually redefining what a pianist/keyboardist/performance artist is, in today’s world. She annually presents a series of solo concerts entitled THE EXPLODING PIANO. In this enterprise, she has performed and premiered works by a list of established and emerging composers that’s a Who’s Who of contemporary music for piano. The Exploding Piano is a multimedia experience using electronics, theatrical elements, vocal rants, performance art, staging, and collaboration with artists from other disciplines. www.supove.com

Composition of Silicon Breath is supported by an Individual Artist Grant from the New York State Council on the Arts.