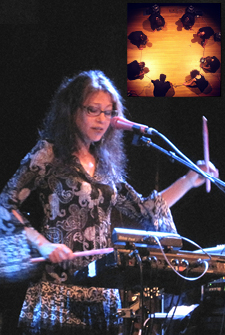 Bay Area techno-songstress Amy X Neuburg performs from her repertoire of ‘avant-cabaret’ songs for voice, percussion-controlled live looping, and live electronic sound, including old favorites, recent compositions, and a surprising, multi-layered cover of Joni Mitchell’s “California.” For this special performance at Roulette, Amy will be creating a guided semi-improvisational work in a made-up language, to be performed with Sideband. Using specially designed and custom made hemispherical speakers and a fleet of laptops, Sideband turns each member of its ensemble in to an island of sound, returning a sense of acoustics and space to the normally flat world of electronic music. Ranging from solos and duos to sextets and beyond, Sideband is an evolving project that inspires composers, performers, and audience members to reevaluate the role of computers in music.

Amy is always delighted to be back at Roulette, where she made her New York debut to a sold-out crowd in 2003 at the SOHO location. A Californian for over 25 years but a New Yorker at heart, many of Amy’s songs are inspired by the urban rhythms and invigorating sensory overwhelm of New York life, as well as by the yearnings and personal entanglements inherent in a bi-coastal existence.

Amy X Neuburg (Oakland, CA) has been developing her own brand of irreverently genre-crossing works for voice, electronics and chamber ensembles for over 25 years. Best known for her innovative use of live looping technology with electronic percussion, her 4-octave vocal range and her colorful lyrics, Neuburg has performed at such diverse venues across the world as Other Minds, Bang on a Can, the Berlin Intl. Poetry Festival, the Wellington and Christchurch Jazz Festivals (NZ), the Warsaw Philharmonic, and the Milwaukee Art Museum. Her acclaimed Secret Language of Subways song cycle with cello trio has been presented by Yerba Buena Center, the SF Symphony After Hours, and the LA Philharmonic Left Coast Festival. Neuburg’s commissions include works for Del Sol String Quartet, Pacific Mozart Ensemble, Robin Cox, Present Music, Solstice, Sqwonk, and numerous dancers and media artists. As vocalist she toured Europe and Japan with three Robert Ashley operas and has premiered many contemporary voice works. Neuburg studied at Oberlin College & Conservatory and the Mills College CCM. Among her many grants and honors she is a recent recipient of the Alpert/Ucross prize.

Born of the Princeton Laptop Orchestra (PLOrk), Sideband first came together as an ensemble for their Carnegie Hall premiere with the American Composers Orchestra and their collaborative concert at The Kitchen with So Percussion and Matmos.

Using specially designed and custom made hemispherical speakers and a fleet of laptops, Sideband turns each member of its ensemble in to an island of sound, returning a sense of acoustics and space to the normally flat world of electronic music. Sideband is an evolving project that inspires composers, performers and audience members to reevaluate the role of computers in performance.

The first ensemble of its size and kind, our parent ensemble, the Princeton Laptop Orchestra (PLOrk), has inspired the formation of laptop orchestras across the world, from Oslo through Dublin, to Bangkok and Hong Kong through Stanford. PLOrk has been covered by the New York Times, Wired Magazine, NPR, The Guardian (UK), and many others. In 2008, PLOrk was awarded a major grant from the MacArthur Foundation.