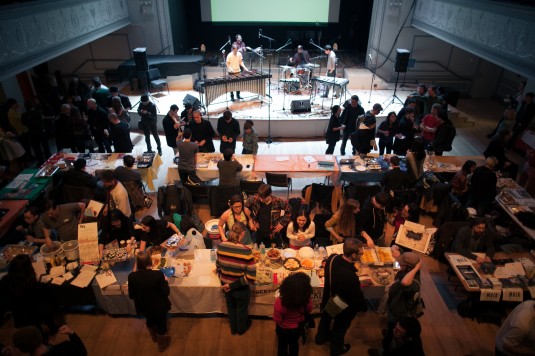 Feb 9, 2015 / Brooklyn, NY — Newspeak and Exapno New Music Community Center are proud to announce the 2015 New Music Bake Sale. Now in its sixth year, the annual New Music Bake Sale is a collective fundraising and social event aimed at supporting and showcasing the new music community of New York City. In the spirit of an old-fashioned bake sale, participating organizations and ensembles represent themselves at tables throughout the space to sell food items (all proceeds from sales remain with the participants) and promote their artistic endeavors. The event also features a marathon of live music with performances every hour by a diverse cross-section of ensembles and solo musicians (performer bios below).

andPlay is committed to expanding the existing violin/viola duo repertoire through performing rarely heard works and commissioning emerging composers. This New York City based duo of Maya Bennardo, violin, and Hannah Levinson, viola, first played to an eager crowd on Fire Island in the summer of 2012, and has since performed at venues such as The Stone, Firehouse Space, and The Tank. andPlay has also appeared on the PLG Arts, East Bank New Music, Composer’s Voice, and the Concerts on the Slope series. The success of their first commissioned piece, “Pulling Anchor” by Matt Frey, led them to pursue similar opportunities with other composers, premiering nine new pieces in the two years since their founding, including works by David Bird, Fjóla Evans, and Ian Ng. Continuing with this tradition, andPlay will work with five composers this upcoming season, including Robert Honstein, Ashkan Behdazi, and Nicholas DeMaison. Maya and Hannah met while studying at Oberlin Conservatory, and continued their educations at New York University and the Manhattan School of Music. Despite living on opposite sides of the city, the members of andPlay enjoy taking the subway to meet for rehearsals and delicious baked goods.andplayduo.com

“Quietly virtuosic” (Alan Kozinn, New York Times) upright and electric bassistEleonore Oppenheim is quickly gaining a reputation as both a valued ensemble player and an engaging soloist. Her “subtle expressivity” and “particular eloquence” (Joshua Kosman, San Francisco Chronicle) have made her a go-to muse for young composers interested in writing for the double bass, and she has built a rich repertoire of solo pieces, some of which will be featured on her upcoming debut solo album, Home. A musical omnivore and polyglot, Eleonore is at home in a wide range of different musical idioms, and has performed and recorded with a variety of different artists and groups, including the Philip Glass Ensemble, Tyondai Braxton, the Wordless Music Orchestra, Shara Worden (My Brightest Diamond), Signal Ensemble, Bryce Dessner (The National), Meredith Monk, The Instruments, Dan Zanes and Friends, composer/songwriter/performer Corey Dargel, Buke and Gase, and others. Eleonore also performs and records regularly with the “All-star, all-female quintet” (Time Out NY) Victoire — whose debut album Cathedral City reached top-10 and best-of lists in theNew York Times, Time Out NY, and NPR in 2010 — and with the new low-strings supergroup Bonjour. eleonoreoppenheim.com

thingNY is a quirky collective of New York composer-performers who fuse electronic and acoustic chamber music with new opera, improvisation, theater, text, song, and installation. Founded in 2006 for an ad hoc festival in the historic Loew’s Jersey City Theater, thingNY performs experimental sound works created collaboratively by the core ensemble – Paul Pinto, Erin Rogers, Jeffrey Young, Gelsey Bell, Dave Ruder, and Andrew Livingston – and by adventurous composers such as Robert Ashley, Frederic Rzewski, John King, Pauline Oliveros, Miguel Frasconi, Vinko Globokar, John Cage, Julius Eastman, James Tenney, David Snow, and Andrea La Rose. The musicians of thingNY have collaboratively created two concert-length operas: ADDDDDDDDD, premiered in 2009 and released on CD in 2010 with a comic-book libretto, and Time: A Complete Explanation in Three Parts, a 2011 performance collaboration with Panoply Performance Laboratory accompanied by a 250-page hardcover book. thingNY is a driving force in the New York music community, working to bolster and support new music and experimental performance, curating the New Music Showdown (2013-2014) and the Immediacies Series (2012-2014), putting a swath of performers from NYC and beyond in conversation with one another and allowing them to perform anti-concert-hall, or difficult-to-program works. thingNY are currently developing a third concert-length, collaboratively-written opera for 2015 called This Takes Place Close By. While in production, this latest opera has toured to Philadelphia, Boston, New Haven, and Edmonton and Calgary, Canada. thingny.com

C4: The Choral Composer/Conductor Collective is a unique, award winning chorus that is directed and operated collectively by its singing members, functioning not only as a presenting ensemble in its own right but also as an ongoing workshop and recital chorus for the emerging composers and conductors who form the core of the group. Now celebrating its 10th Season, C4 is the first organization of its kind and one of the few choral groups in the nation to focus exclusively on the music of our time, performing only music written in the last twenty-five years. C4 presents a wide array of choral works by veterans such as Chen Yi, Libby Larsen, Richard Rodney Bennett, Olli Kortekangas, Meredith Monk, Huang Ruo, Steven Stucky, George Tsontakis, and Toby Twining as well as works by emerging composers—C4 members and others. C4 has premiered over 100 works and the ensemble has proven its commitment to presenting high caliber music in a welcoming atmosphere. C4 Volume 1: Uncaged, the group’s first professionally produced album was released in June 2013. C4’s work fills an important niche in the cultural life of New York, and was honored with a 2014 Chorus America/ASCAP Award for Adventurous Programming.c4ensemble.org

Kathleen Supové is one of America’s most acclaimed and versatile contemporary music pianists, known for continually redefining what a pianist/keyboardist/performance artist is in today’s world. Ms. Supové annually presents a series of solo concerts entitled The Exploding Piano. In this series, she has performed and premiered works by a list of established and emerging composers that’s a who’s who of contemporary music for piano. She has developed The Exploding Piano into a multimedia experience by using electronics, theatrical elements, vocal rants, performance art, staging, and collaboration with artists from other disciplines. Anthony Tommasini (New York Times) says: “what Ms. Supové is really exploding is the piano recital as we have known it, a mission more radical and arguably more needed.” In May, 2012, Supové received the John Cage Award from ASCAP for “the artistry and passion with which she performs, commissions, records, and champions the music of our time.” supove.com

Hailed by The New York Times as “soulful and compelling”, violinist Jennifer Choi has charted a career that breaks through the conventional boundaries of solo violin, chamber music, and the art of creative improvisation, and is regularly sighted in performances that stretch the limits of violin playing, often calling for extended techniques, improvisation, and the use of electronics. In 2006 she received a grant from the New York State Music Fund for the premiere and performances of Holding Fast for violin and video written for her by Randall Woolf. She has given numerous world premieres of chamber and solo works by the likes of John Zorn, George Lewis, and Zeena Parkins, as well as the U.S. premieres of works by Jacob ter Veldhuis and Helmut Lachenmann. In 2011, Jennifer was invited to premiere Wadada Leo Smith’s violin concerto Afrikana 2. She has recorded over a dozen albums for John Zorn’s Tzadik Records featuring compositions by Zorn, Elliott Sharp, Wadada Leo Smith, and Susie Ibarra, as well as many recordings for New Focus Albany and Brassland record labels. A prominent chamber musician, Jennifer was a member of ETHEL during their 2011-2012 season and has performed with the Sirius String Quartet, the Susie Ibarra Trio, and Fireworks Ensemble. She is a frequent collaborator with the flexible chamber ensemble Either/Or. jenniferchoi.com

Avant-pop band Tigue alternates between hooks and drones, process and improvisation; uniting homegrown ethos and conservatory precision. Hailing from Ohio but currently located in Brooklyn, Tigue’s three members (Matt Evans, Amy Garapic, and Carson Moody) have worked together extensively on original and composed music for nearly half a decade. The percussion charged trio will release their debut full-length Peaks later this year while collaborating on new, composed works by Adrian Knight and Man Forever. With rhythmic kaleidoscopes and patterned drones, Tigue has crystalized out of, and in spite of, contemporary music and the avant-garde. Dayton City Paper calls Tigue “…one of the premier young percussion-based groups in Brooklyn right now.” tiguemusic.com

The Knells are a post progressive, neo-psychedelic art rock ensemble from Brooklyn, NY that combine the dynamic, formal, and harmonic intricacies of jazz and classical music with the rhythmic energy and expressive vitality of rock. Their eponymous debut album, which The New York Times describes as a collection of songs that “sweep ahead, through passages of tolling solo electric guitar, of elegiac vocal melodies and harmonies, of note-bending quasi-Indian strings and guitar, of progressive-rock processionals,” was released on New Amsterdam Records in November 2013, and was cited as one of the year’s most notable releases in The New Republic, The Washington Post, The New Yorker, The Daily Beast, Textura, and many others. theknells.com

The New Music Bake Sale is also sponsored by: