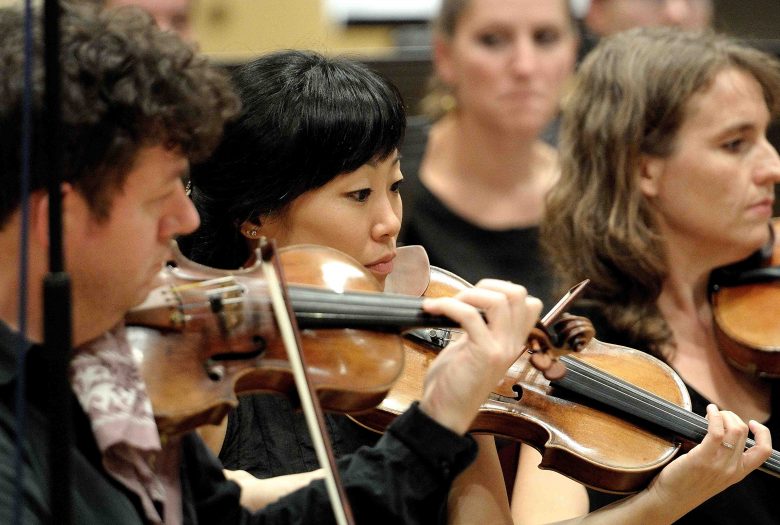 Program
Petr Kotik
There is Singularly Nothing (1972/73)

Ostrava Days is one of the largest summer new-music events in the world. It combines a biennial three-week-long Institute with a festival of 17 concerts and events, with a focus on music for large orchestra. Ostrava Days includes 35 resident-students from around the world, two resident orchestras, and resident composers and musicians who work with students and participate in performances. Ostrava Days 2013 included, among others, the participation of Philip Glass, Christian Wolff, Jon Gibson, Peter Ablinger, Bernhard Lang, Petr Kotik, Carola Bauckholt, Charlemagne Palestine, Martin Smokla, Petr Cígler. Ostrava Days 2013 was selected as one of Artforum’s picks for Best of 2013 in music.

Tonight’s program consists of pieces featured at Ostrava Days 2013, including Ligeti’s Trio for Violin, Horn, and Piano, one of the most challenging pieces of chamber music ever written. For Ligeti’s oeuvre, the horn trio marks the opening of his ‘third way’ style, which Ligeti claimed to be neither modernist or postmodern.

… the 2013 edition of the Ostrava Days festival – the intense biennial in the Eastern end of the Czech Republic has long been known for stretching into long nights across August. But this year seemed especially expansive…

…an 80-piece orchestra built to an onslaught of five percussionists hitting hard with the full contingent punctuating, it was truly exciting. The Iranian composer Idin Samimi Mofakham’s Mirage nicely melded the near silent strings with Chris Nappi playing percussion on the surface of a container of water…
Kurt Gottschalk, New Music Box

Search for Ostrava in any guide book to the Czech Republic and you won’t find it… But what I found, when I arrived was a self-effacing city – and for three weeks every two years leading figures from the world of avant-garde and contemporary music come to the town for Ostrava Days.

… And I was glad to have had the chance to hear this subversive epic of the avant-garde [commenting on Many Many Women by Petr Kotik].
Elizabeth Davis, BBC Music Magazine

Ostravská banda was founded in 2005 by Petr Kotik as the resident chamber orchestra of Ostrava Days. It consists of young musicians from Europe and the U.S.A. whose primary interest is in the performance of new music. Ostravská banda has appeared at concerts throughout Europe, and performed several times in New York, including Zankel Hall, Alice Tully Hall, Bohemian National Hall, and at Roulette. In addition to its artistic director Petr Kotik, Ostravská banda has also worked with conductors such as Roland Kluttig, Petr Rundel, Johannes Kalitzke, and Ondrej Vrabec.
http://www.newmusicostrava.cz/en/ostravska-banda/

S.E.M. Ensemble was founded in 1970 by Petr Kotik. It is one of the oldest continuously performing ensembles of new music in the United States. In 1992, SEM expanded into the orchestra of the S.E.M. Ensemble, with a tribute to John Cage at Carnegie Hall, premiering the complete Atlas Eclipticalis by Cage, with David Tudor performing Winter Music. S.E.M. Ensemble maintains a flexible instrumentation according to its programs, which feature major works composed in the past 50 years alongside music by the youngest generation of composers. One could encounter SEM Ensemble as a group of three musicians, or as a large orchestra close to 100 musicians.
http://www.semensemble.org

O.B. Trio includes three soloists from Ostravská banda, Conrad Harris, violin (New York), Daniel Costello, horn (Berlin), and Daan Vandewalle (Ghent). The group originated at the Ostrava Days 2013, and it was their performance of the Ligeti horn trio that brought them to prominence.

String Noise was founded in 2012, and has since become a regular feature of the New York new music scene. Hailed by the New York Times as an “enterprising violin duo” with “lightning fast reflexes and warmly matched sounds,” String Noise consists of violinists Conrad Harris and Pauline Kim Harris.

There is Singularly Nothing (1971-73) is a series of 22 solos of which ten are for voices and twelve for instruments. 18 solos were composed in 1971-73 (#4-9 for voice) and in 1995. additional four solos for voice (# 19-22) were added (The use of the same composition method and the same text does not make the additional solos characteristic to the style of music Kotik was composing in ’95, hence the dating of the piece should remain ’71-’73. The text are excerpts from a lecture by Gertrude Stein entitled  “Composition as Explanation,” from 1926. The title of the piece is derived from the opening sentence of the text (Solo #4)::

“There is singularly nothing that makes a difference a difference in beginning and in the middle and in ending except each generation has something different at which they are all looking.  By this I mean simply that anybody knows it that composition is the difference which makes each and all of them then different from other generations and this is what makes everything different otherwise they are all alike and everybody knows it because everybody says it.”

There is Singularly Nothing has no distinct beginning or ending and any number of solos can be used in any transposition (the piece was composed without the expectation for a performance of the complete material of the 22 solos). On March 26, two singers and three instrumentalists will perform selected solos.

In September 1964, the Czech ensemble based in Prague, Musica viva pragensis, of which I was the director, performed with John Cage in Prague and at the Warsaw Autumn festival. The performances were part of Merce Cunningham Dance Company events. In Prague, we performed, among other pieces, Concert for Piano and Orchestra conducted by Cage, with David Tudor at the piano. For the Warsaw performance, Cage wanted to perform For Six or Seven players by Christian Wolff, but the one and only rehearsal we had proved to be impossible to properly prepare the piece and Cage gave up the idea of programming it.  He left the score and parts with me. Both of us thought, most likely, that Musica viva pragensis will perform it later. This never took place. A few days after our rehearsal, Musica viva pragensis had a concert of its own, also at the Warsaw Autumn, and my piece Music for 3 caused such a scandal and riot, that I left the ensemble.

Christian Wolff composed For Six or Seven players in 1959, while serving in the United States Army. He mailed the manuscript to Cage, not actually retaining a copy for himself. Cage regarded some of the aspects of the manuscript impractical and took it on himself to create a new version, painstakingly re-notating the piece into an exact score with parts. Despite his effort, the resulting score is far from simple to interpret.
– Petr Kotík, New York, October 5, 2010

The instrumentation is trumpet, trombone, piano, violin, viola, double bass and optional flute (hence 6 or 7). The duration is about 23 minutes, but that could have been tied to the duration of  “Rune.” It can be shortened in a concert performance.

Autumn Thoughts has a special form of it’s whole: two sharply contrasting halfs just lay one next to the other. The first one, fast and noisy, is a hoquetus of few elements, which jump round and round, being still slightly rearranged as to timing and order of appearance g minors. The second section is made of long soft tones, always as if initiated by an attack of percussion.

I like to imagine various pictures when I am thinking of this music: The whole I see as a fantastic animal, which has say a head and front legs of horse but the rest of a fish. Or the pie might be titled “The Fall Asleep”: then the first section would be the hectic reality, while the other were a dream. Maybe the dream about 24 slaps in the face, thorough to such an extent that it rings!

Violin Duo for Petr for 2 violins was composed in late 2011 for Conrad Harris and Pauline Kim Harris as a birthday gift for Petr Kotik and first performed in Ostrava and New York in January 2012. When, a few months later, the violin duo Harris/Kim-Harris became the String Noise, the piece became a part of their repertoire, being performed in the U.S. as well as in Europe.

The piece Mirage for Water and String Trio (2012) was commissioned by Iran Artists Forum and is dedicated to the memory of the victims of the 2012 earthquake in northwestern Iran. In the path of evolution of music in Iran, there is no tradition and school of music composition as in the West; every musician and composer reaches his very own personal language and style of composition, which is not usually passed to later generations; this cycle is repeated over and over through the centuries. As a part of this society and culture, with a general atmosphere of music rather than a continuous tradition of composition, I concentrate on raw musical materials and folkloric themes from different cultures and ethnicities of Iran and the Iranian plateau. I try to link the regional musics of Iran with international music by passing the monophonic music of my country through my knowledge of Western achievements in music and composition and finding a personal style in this manner. Through this practice, using elements like melodic movement, I tried to harmonize regional and historic folk music, later tried to find an algorithm and logical system based on ranian modes, and further tried many other experiments, at last arriving at something like a Ukrainian borscht with very fine and rare Iranian spices! I suppose every composer who wants to introduce his very own music to the world, and wants to make his language intelligible for other people and cultures, has to create a music based on his wide knowledge of music, international and regional, but not focusing on one of them alone. In Mirage, I tried to combine the soul and impression of Iranian music with the western/international knowledge of music composition, in a process I named “composite/mixed textures”; in this method, I do not engage myself with techniques like harmony and polyphony, but just use textures, which one could describe as “wide microtonal glissandi”, “Dynamics”, “long extended lines”, “coherent but contradictory lines with no regulating rhythmic patterns”,

Mikka and Mikka “S” (dedicated to Mica Salabert) were Xenakis’ first works for solo violin. The pieces can be played separately or as a single work. Here, Xenakis explores the use of glissandos within a dense musical structure. The pieces were commissioned and written for Xenakis’ publisher Mme. Francis Salabert.

Trio (for French horn, violin and piano, 1982) exemplifies Ligeti‘s new style, which he himself labeled as the “third path“ between modernism and post-modernism. The instrumentation evokes Brahms (Trio Op. 40); the structure is in classical four-movement form, the first three movements in three-part form, the concluding movement a passacaglia, and the harmonies include ample use of major and minor triads. However, there are also significant quirks: Bulgarian rhythms are utilized, triads are put outside a tonal context, the French horn uses (contrary to the violin and piano) intervals in just intonation. This manner of using French horn became characteristic for Ligeti. The work’s atmosphere is bizarre and foreshadows his late works, with its broad expressive span ranging from grotesque to tragic.