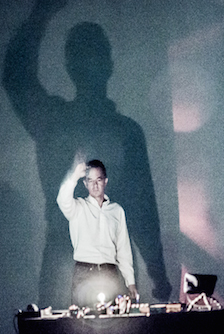 In his first New York concert in four years Nicolas Collins presents a mix of recent works for ensemble and solo electronics. In Roomtone Variations the resonant frequencies of the Roulette concert hall are mapped, in real time, through controlled acoustic feedback, and projected as staff notation. Once the staves are filled the musicians in Either/Or improvise variations on the notes, gradually stepping through this site-specific “architectural tone row”. The computer-generated notation in Bracken guides the ensemble through interactions inspired by Christian Wolff’s “coordination” scores of the 1960s, extended by adapting techniques of electronic music onto acoustic instruments.  Works for damaged circuits and functional software round out an evening of adventurous electro-acoustic music.

New York born and raised, Nicolas Collins lived most of the 1990s in Europe, where he was Visiting Artistic Director of Stichting STEIM (Amsterdam), and a DAAD composer-in-residence in Berlin. He is editor-in-chief of the Leonardo Music Journal, and a Professor in the Department of Sound at the School of the Art Institute of Chicago. His book, Handmade Electronic Music – The Art of Hardware Hacking (Routledge), has influenced emerging electronic music worldwide. Collins has the dubious distinction of having played at both CBGB and the Concertgebouw.

Since 2004, Either/Or has been at the forefront of New York’s contemporary music scene, programming new and recent works for unconventional ensembles or soloists that are rarely heard elsewhere. Equally informed in American experimentalism and in the European avant-garde, Either/Or collaborates with emerging and established artists from a broad aesthetic spectrum. Performances throughout the Northeast, including Philadelphia Museum of Art, ICA Boston, Miller Theatre, The Kitchen, and venues across NYC, as well as frequent appearances at experimental music venues such as The Stone, Roulette, and Issue Project Room.

Programs have included numerous world, U.S., and New York premieres (over 100 this season alone); these range from major works of American experimental music to rarely heard classics from the dynamic margins of the European avant-garde. In addition to ongoing collaborations with emerging artists, Either/Or has brought to New York distinguished composers such as Helmut Lachenmann (2008), Paolo Aralla (2009), Chaya Czernowin (2010, 2011), Karin Rehnqvist (2012), and Rebecca Saunders (2013) for portrait concerts and lectures through E/O’s Composer’s Atelier series.

Nicolas Collins’ travel is supported by The School of the Art Institute of Chicago.