Night of Improvisation with The Tori Ensemble and special guests 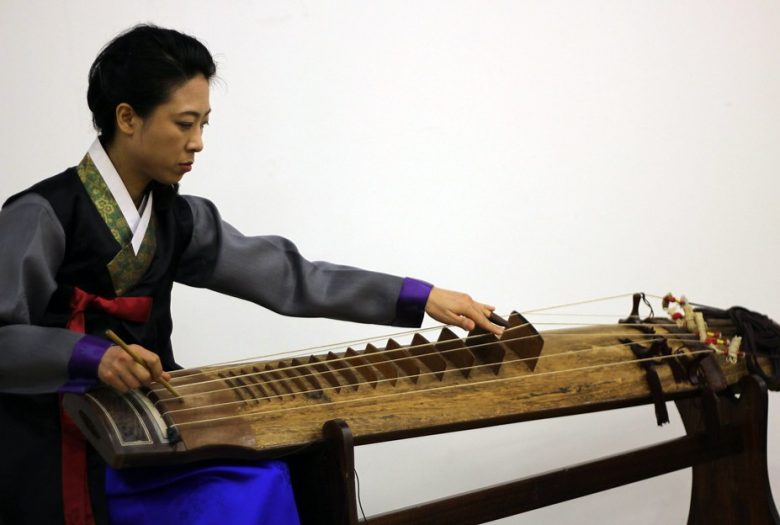 Night of Improvisation with The Tori Ensemble and special guests

YOON JEONG HEO (geomungo and composer)
Yoon Jeong Heo, geomungo performer and composer and is active as a soloist who cuts across various genres, expanding the possibilities of geomungo and Korean music by fusing traditional music, impromptu music and contemporary music. Heo graduated from the National High School of Korean Traditional Music and received her B.A. and M.A. from Seoul National University. In 1984, she began her study of geomungo sanjo, with the Living National Treasure Han Gap Duk, obtaining the prestigious master title “yisuja.” Heo served as the deputy concertmaster of the Seoul Metropolitan Korean Music Orchestra (1990-1994). She has performed as part of numerous groups and festivals – among them with the German artist Stephan Micus, The San Jose Chamber Orchestra
The KBS Korean Traditional Music Orchestra And as part of concert tours to Germany, England, France, the United States, China, Japan and Poland. Heo was awarded a Ministry of Culture prize in 1986 in the field of Korean Traditional Music as well as a fellowship from the Asian Cultural Council, which is supporting Heo’s 2007-08 residency in New York City. Heo is a member of “Sangsang,” a soloist ensemble, art director of Bukchon Changwoo Theather, the leader of project group “go-MOON-go” and lecturer at Jungang University and Yongin University.

NED ROTHENBERG (clarine,bass clarinet, alto saxophone, shakuhachi)
“Other kinds of music might entertain you, cheer you up or pump the blood, but his clarifies the mind and throws your soul wide open.” (Manfred Pabst, Neue ZÜrcher Zeitung)
Composer/Performer Ned Rothenberg has been internationally acclaimed for both his solo and ensemble music, presented for the past 28 years in North and South America, Europe and Asia. Rothenberg plays clarinet, bass clarinet, alto saxophone and the shakuhachi, the Japanese bamboo flute which he has studied with the leading masters Katsuya Yokoyama and Goro Yamaguchi. Rothenberg leads the trio Sync, with Jerome Harris, guitars and Samir Chatterjee, tabla. Recent recordings include Sync’s Harbinger, Intervals, a double-cd of solo work, Live at Roulette with Evan Parker and Are You Be, by R.U.B. (Rothenberg/Kazuhisa Uchihashi/Samm Bennett) on Rothenberg’s Animul label. Chamber music releases include Inner Diaspora and Ghost Stories, on Tzadik and Power Lines on New World, along with The Fell Clutch on Animul. Other collaborators have included Sainkho Namchylak, Kang Tae Hwan, Paul Dresher, John Zorn, Marc Ribot and Masahiko Sato.

Erik Friedlander (cello and composer)
Cellist Erik Friedlander is a composer and an improviser, a classical musician and a jazzbo. As a longtime virtuosic veteran of NYC’s downtown scene, he has not only backed John Zorn, Laurie Anderson, and Courtney Love, but has also recorded 8 CDs as a leader. Friedlander’s compositional choices and dynamic improvising style have staked out new ground for his instrument. Whether performing solo or with one of his bands, Friedlander blends his vision of what the cello can be pushed to do, while maintaining a firm grasp on traditions, both improvisational and classical.
From the beginning, Friedlander was the beneficiary of a most unusual musical legacy. His father, photographer Lee Friedlander, famous for the cover photos he took for Atlantic Records in the 60s, passed his passion for R&B and jazz to his son. Erik Friedlander’s earliest memories are of a household filled with the sounds of Ray Charles, Aretha Franklin, McCoy Tyner, Ornette Coleman, and John Coltrane. He’s been playing the cello since age 8, and if you have a concept of what that instrument can do, he will reshape it. “Rostropovich one second and Rottweiler the next.” (Pitchfork)

Satoshi Takeishi (Drum, Percussion)
A native of Mito, Japan, Satoshi Takeishi is a drummer, percussionist, and arranger. He studied music at Berklee College of Music in Boston. While at Berklee Takeishi developed an interest in the music of South America and went to live in Colombia at the invitation of a friend. He spent four years there and forged many musical and personal relationships. One of the projects he worked on while in Colombia was ‘Macumbia’ – combining traditional, classical and jazz music – with composer/arranger Francisco Zumaque. With this group Takeishi performed with the Bogota Symphony Orchestra to do a series of concerts honoring the popular Colombian composer Lucho Bermudes.
In 1986 Takeishi returned to Miami, where he began working as an arranger/producer as well as a performer. In 1987 Takeishi produced ‘Morning Ride’ for jazz flutist Nestor Torres on Polygram Records. His interest expanded to the rhythms and melodies of the Middle East where he studied and performed with Armenian-American oud master Joe Zeytoonian. Since moving to New York in 1991, Takeishi has performed and recorded with musicians such as Ray Barretto, Carlos ‘Patato’ Valdes, and Marc Johnson. Takeishi continues to explore multi-cultural, electronic and improvisational music with local musicians and composers in New York.

Kwon Soon Kang (Vocalist – “Jeongga”)
Kwon Soon Kang is a leading vocalist in traditional and contemporary music in Korea. She has devoted herself to performing and perfecting both Korean traditional court music (jeongga) as well as contemporary music. She has performed extensively throughout Korea and abroad, working with many composers, dancers and theater companies, ensembles and orchestras, including the -National Orchestra, KBS Traditional Orchestra, – Seoul Metropolitan Traditional Orchestra, – Kim Duksoo Samulnori Group and Nan Kye Traditional Ensemble. She has also been cast in performances directed by such international art directors as Ong Keng Sen, Jinhi Kim and Chen Shi-Zeng, working with traditional and contemporary artists from around the world. Ms. Kang has participated in the Melbourne Arts Festival, the 50th Anniversary of Korea’s Liberation, Young Musicians Festival and the Korea Festival. She has also performed under the auspices of the International Cultural Exchange Foundation of Korea. Ms. Kang has released the first jeongga album, “Sounds of Heaven,” in 2004, recording with Samulnori group, and has received a number of prizes in competitions such as the Dong-A Competition and the Seoul Traditional Music Festival sponsored by Korean Broadcasting System (KBS).

Young Chi Min (Chang go – Korea traditional percussion)
Young Chi Min has performed in Japan as well as in Korea, as one of the chang-go players in a Korean super percussion band Puri, and as the music director of Reimei, a traditional Korean art group in Japan. He has mastered the notoriously difficult techniques of the chang-go (a traditional percussion instrument in Korea). He has performed with distinctive bands and musicians such as Chong Myoung-Hun, Chong Myoung-Wha, Shin Hea-Chul, Ssai, Num Goong-Yon, Panick, DA PUMP, Shinjuku-
Ryouzanpaku, Shanshan Typhoon, Kunihiko Ryo, Eitetsu Hayashi and Okura Shonosuke. Yong Chi Min left Puri after their Japanese tour in 2001, and has made Japan the new headquarters of his performances and musical activities. He is one of the most exciting percussionists/composers in both Korea and Japan and is now directing San-Ta (meaning “scattering and hitting”) a group creating new interpretations of traditional Korean music.

Ikue Mori moved from her native city of Tokyo to New York in 1977. She started playing drums and soon formed the seminal NO WAVE band DNA, with fellow noise pioneers Arto Lindsay and Tim Wright. DNA enjoyed legendary cult status, while creating a new brand of radical rhythms and dissonant sounds; forever altering the face of rock music. In the mid 80’s Ikue started in employ drum machines in the unlikely context of improvised music. While limited to the standard technology provided by the drum machine, she has never the less forged her own highly sensitive signature style. Through out in 90’s She has subsequently collaborated with numerous improvisors throughout the US, Europe, and Asia, while continuing to produce and record her own music.
1998, She was invited to perform with Ensemble Modern as the soloist along with Zeena Parkins, and composer Fred Frith, also “One hundred Aspects of the Moon” commissioned by Roulette/Mary Flagler Cary Charitable Trust. Ikue won the Distinctive Award for Prix Ars Electronics Digital Music category in 99. In 2000 Ikue started using the laptop computer to expand on her already signature sound, thus broadening her scope of musical expression.

Zeena Parkins, multi-instrumentalist, composer, improvisor, well-known as a pioneer of the electric harp, has also extended the language of the acoustic harp with the inventive use of unusual playing techniques, preparations, and layers of digital and analog processing. Zeena makes use of anything within reach as a possible tool with which she can enhance the sonic capabilities of her harps. She accurately describes her harp as a “sound machine of limitless capacity” and has used, household objects and hardware store finds, including: alligator clips, nails, rubber erasers, rubber tubing, felt, bows, metal candy lids, oversized metal bolts, hair clips, glass jars, discarded strings, as well as more conventional: leslie cabinets, guitar pedals, and numerous other digital processing hardware and assorted and varied software.

Min Xiao Fen
Pipa player and composer Min Xiao-Fen is known for her fluid style. She is a world recognized virtuoso in both orchestral and underground projects. Ms. Min was a pipa soloist with the Nanjing Traditional Music Orchestra in China, winning the Jiangsu national pipa competition and eventually becoming a first class artist in China. Since Ms. Min moved to the United States in 1992, she has been featured soloist with the Brooklyn Philharmonic, the Pacific Symphony, the San Diego Symphony, the New Haven Symphony Orchestra, the Stanford Symphony Orchestra, the Macao Orchestra and the Nieuw Ensemble in Holland. Min was invited by Jazz at Lincoln Center to play a solo set of the music of Thelonious Monk. Her Blue Pipa Trio was invited to perform at the JVC Jazz Festival in 2006. She also worked with composers John Zorn, Butch Morris, Ned Rothenberg, Philip Glass, Wadada Leo Smith, Mark Dresser and Jane Ira Bloom. Min is also the founder of Blue Pipa, Inc.(www.bluepipa.org) and currently lives in New York City.

Sylvie Courvoisier
Composer/pianist , Sylvie Courvoisier was born and raised in Lausanne, Switzerland. She moved to Brooklyn, New York in 1998, where she currently resides .
She has played and recorded with John Zorn, Ikue Mori, Tim Berne, Mark Feldman, Tony Oxley, Yusef Lateef , Joey Baron, Joelle Léandre, Herb Robertson, Jim Staley, Tom Rainey, Mark Dresser, Lotte Anker, Fred Frith …. Her latest releases as a leader are: “ABATON” with Mark Feldman and Erik Friedlander on ECM Records (2004), “LONELYVILLE” with her new quintet on Intakt Records (2007) and a solo piano album ,SIGNS AND EPIGRAMS ,on Tzadik Records (2007). Her lastest release as a coleader are ” As soon as Possible”, a trio with Ellery Eskelin and Vincent Courtois on Cam Jazz ( 2008) and “Every so Often” duo with Ellery Eskelin on Prime Source( 2008). Sylvie is currently the leader of her own quintet “Lonelyville” and the Trio “Abaton”. She is a member of “Mephista”, an improvising trio with Ikue Mori and Susie Ibarra;” Herb Robertson Quintet”, ” Agra Dharma” with Makigami Koichi and Ikue Mori, Lotte Anker’s Trio, new 4tet with Gerry Hemingway, Mark Feldman and Thomas Morgan… Since 1997, she also performs regularly in Duo with violonist Mark Feldman and in solo.
www.sylviecourvoisier.com