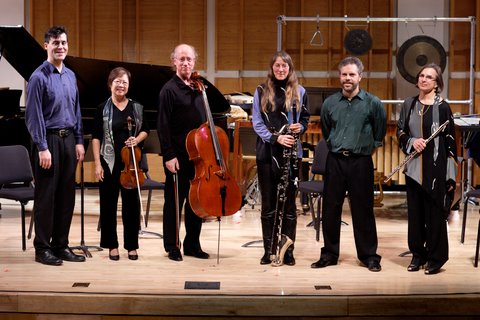 NYNME presents a group of six dramatic and virtuosic works by younger composers, including two New York premieres and one world premiere performance.  The ink is barely dry on two of the works:  we will be presenting the second performances of Alexandre Lunsqui’s Toy and of Emily Koh’s bridging isolation, both completed earlier this year and premiered last month outside New York.  Ben Hackbarth’s work, hub and Chris Cerrone’s work The Night Mare both extend the sound of the ensemble with cued pre-recorded sounds, but otherwise contrast in style, pacing, approach to materials, and organization. Jean Kopperud will give Sebastian Armoza’s virtuosic Strekka for solo bass clarinet its premiere performance.  We round out the program with a work from NYNME’s repertoire, Lei Liang’s Trio, for piano ‘cello and percussion, from 2002.

The New York New Music Ensemble has commissioned, performed and recorded the important and upcoming composers of our time over the past 37 years. They have in fact been the means by which many of these have become more known and appreciated. NYNME has been recognized and supported by many significant American foundations, including the Jerome Foundation, the Fromm Foundation at Harvard, the Mary Flagler Cary Foundation, the Mellon Foundation, the Koussevitzky Foundation, the NEA and NYSCA, among others.  They have performed innumerable college residencies (Long Beach, UW Madison, Univ. of Pittsburgh, etc.), appeared at major festivals (Ravinia, Santa Fe, June in Buffalo, Pacific Rim, The Thailand International Composers Festival, etc.), and have recorded a huge discography of important chamber works.  They have traveled to Europe, Asia, and South America to perform, teach and record, and have explored theatre music and adventuresome electronic and interactive new technologies.