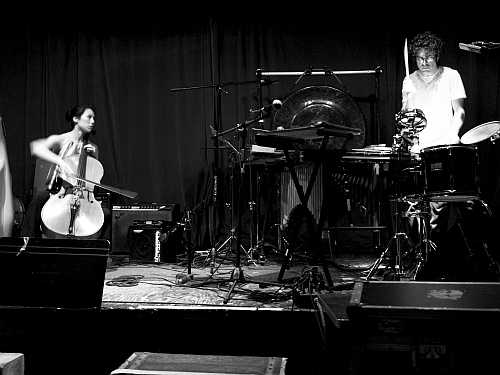 Based in New York City, Odd Appetite is the duo of performers/composers Ha-Yang Kim (cello) and Nathan Davis (percussion.) Odd Appetite makes music that is inspired by their experience with Balinese and Karnatic music and infused by a fascination with acoustic phenomena. Giant gongs, microtonal bells, drums, pipes, and hammered dulcimer are heard alongside a de-tuned and amplified cello, processed with stomp boxes”¦all played with virtuosity, passion, and spirit.

Both classically trained in American and European conservatories, Kim and Davis compose, collaborate and perform their own music and music that they commission for the duo. Odd Appetite made its Carnegie Hall debut in 2004 and since has performed at a wide variety of venues, including the Stone, Galapagos, and Bard College as well as at events throughout Europe and Indonesia.