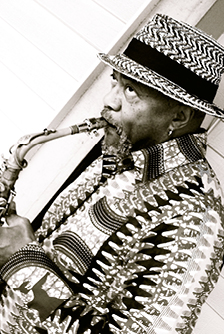 Saxophonist and composer Oliver Lake’s artistic vision remains daring, unique and uncompromising, helping him maintain his place as one of the preeminent saxophonists in the progressive jazz scene, a position he has long held during his long and brilliant career. Lake presents premieres of his latest works for string ensemble: Spaces for 3 Violins,  5 Sisters for String Ensemble, and other new compositions. These compositions, which are both pre-written (notated) as well as improvised, blend complex rhythmic drive and remarkable melodies with daring improvisation, embolden by the talents from members of the celebrated FLUX Quartet. Guest pianist Vijay Iyer will join Lake in a performance as a duo.

A titan of jazz as performer, composer, bandleader, and ambassador, Oliver Lake’s storied musical journey began as a vital member of the Black Artists Group, a multidisciplinary jazz collective that arose in the fertile St. Louis arts scene of the early 1970s. In 1977 Lake co-founded the World Saxophone Quartet with David Murray, Julius Hemphill, and Hamiet Bluiett, a trailblazing ensemble that fused funk & free jazz. The 1993 recipient of the Guggenheim Fellowship, Lake continues to work well into the 21st Century with several brilliant and creative minds, such as his led Organ Quartet and Big Band groups, Tarbaby and with notable collaborators such as Tom Chiu, Myra Melford, Roscoe Mitchell, Vijay Iyer, Geri Allen, Meshell Ndegeocello and many others.
oliverlake.net