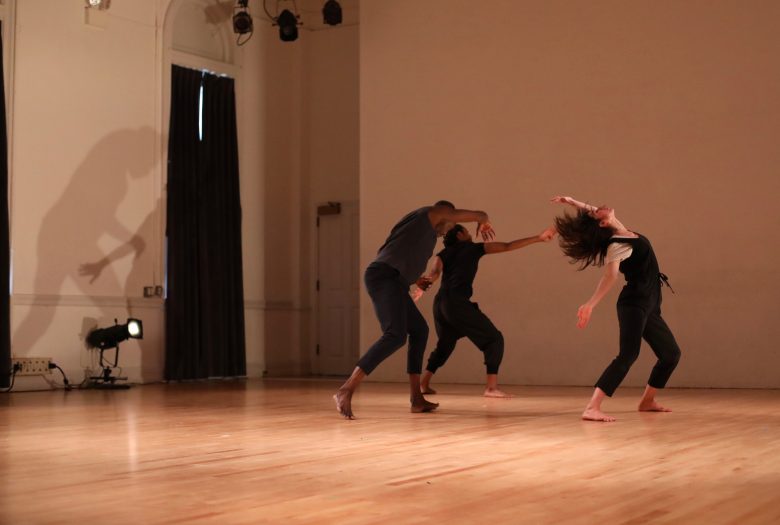 Roulette presents future erasure, the premiere of a new work by dancer and choreographer Oren Barnoy, born out of a desire to craft a daily prayer through movement. Barnoy’s piece for three dancers and one sound designer explores the space between the initial impulse to create and the moment before the meaning appears. The dance grows through time, building on itself, stretching and sustaining the moment before a gesture takes on an identity. The dancers activate and transform the movement, passing through meaning before dismantling it altogether.

Oren Barnoy has shown dance choreography at PS1 MOMA, Potsdam Film School, Dixon Place, La MaMa Experimental Theater and New Dance Alliance – Performance Mix. Barnoy was a Studio Series artist in residence at Dance Theater Workshop in 2011 and in 2012/2013 an Artist in residence at The Tribeca Performing Arts Center. His installation work has been presented by Art Basel, Miami. Barnoy was a featured Dj at the Ultra Music Festival in 2007 and 2008. He has had the honor to dance for luciana achugar, Emmanuelle Huyn, Hadar Ahuvia, Ben Van Buren, Sarah Michelson, DD Dorvillier, Heather Kravas, and the Daniel Gwirtzman Dance Company.

Dancer, Choreographer and Fitness Professional, Candace Tabbs has had the pleasure of working with artists such as Ralph Lemon, Jamie Jackson, Donna Uchizono, Ephrat Asherie and Carlos Neto and teaching and performing with Joya Powell/Movement of the People Dance Company and Dances for a Variable Population. In her own work, Candace explores the conversation between Modern, Hip Hop and dances of the African Diaspora and the presence of mind, body and spirit in dynamic expression.

Molly Lieber recently performed in works by luciana achugar, Oren Barnoy, Wally Cardona, Brian Rogers, and Donna Uchizono. She has been dancing in luciana achugar’s work since 2012. She received a 2016 New York Dance and Performance “Bessie” Award for performance and was on the cover of Dance Magazine’s March 2016 issue. She teaches at Movement Research and Gibney Dance Center.

James Lo (sound design) is a product of suburban Detroit, the New England Conservatory, and Columbia University. He has created scores for choreographers Molly Leiber and Eleanor Smith, Neil Greenberg, Elena Demyanenko, Katie Workum, Ani Javian, Heather Olson, Mei-Yin Ng, Sarah Michelson, Maria Hassabi, Jennifer Monson, Levi Gonzalez, Ralph Lemon, RoseAnne Spradlin, and Lucy Guerin among others. As a younger man, he received New York Dance and Performance (BESSIE) Awards for John Jasperse’s furnished/unfurnished and for Donna Uchizono’s State of Heads, and was named one of Treblezine.com’s 50 favorite drummers for his work with the bands Chavez and Live Skull. In addition to sound design, Lo has worked as an embedded systems engineer for Robert Ashley, Elizabeth Streb, and David Behrman, and as an enterprise software consultant for many major financial services and life sciences companies.

Oren Barnoy: future erasure is presented as part of DANCEROULETTE and is supported, in part, by the Mertz Gilmore Foundation, the Harkness Foundation for Dance, the National Endowment for the Arts, and the New York City Department of Cultural Affairs.