Pamelia Kurstin with Vehicle of Ascension 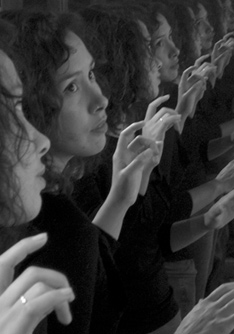 Pamelia Kurstin with Vehicle of Ascension

The theremin, the first electronic instrument ever invented, was on the brink of historic oblivion when it was rescued from obscurity by director Steven Martin’s classic 1994 documentary Theremin: An Electronic Odyssey . And while a few brave souls have sought to master this temperamental instrument since then, none have done so with more sly effervescence than Pamelia Kurstin.  From the rock-steady composure she assumes behind the instrument (necessary lest her breathing drive the sensors out of tune), one might presume a shrinking conservatory personality, but a quick glance at the MySpace page or website of the self-described “bird-punching rollerskating thereminist” will quickly dash any of these quaint notions. Far from being a quirky curiosity, however, Kurstin is a sensitive, emotional stylist capable of coaxing sublime melodic content out of an instrument usually doomed to B-movie sci-fi soundtracks. (And her walking bass imitation is pretty cool too.)  Born in Los Angeles, Kurstin currently resides in Vienna, and performs with acclaimed eccentric rockers Barbez, among many others. Her latest solo CD, Thinking Out Loud, was released in 2007 on John Zorn’s legendary Tzadik label. She’ll bathe your dog and give you a haircut (“if you’re daring,” she warns) in exchange for a six-pack.

Pete Drungle – piano
Pete Drungle (b. Chicago, 1972) is a composer/pianist with a diverse background in music who lives and works in New York. He has played duets with Ornette Coleman, performed internationally with Ronald Shannon Jackson’s legendary Decoding Society and Craig Harris’ Nation of Imagination, arranged music for the Kronos Quartet and composed for and conducted the Dallas Symphony Orchestra. In 2006, Drungle received the prestigious Bessie Award for Best Composer for his score to Michael Portnoy’s avant-dance piece THE ‘K’ SOUND. Drungle enjoys being involved in cross-disciplinary projects, and has performed in museums, art galleries, theaters, and music halls internationally, including The Museum of Modern Art, The Kitchen, and the Cathedral of St. John the Divine, all in New York.