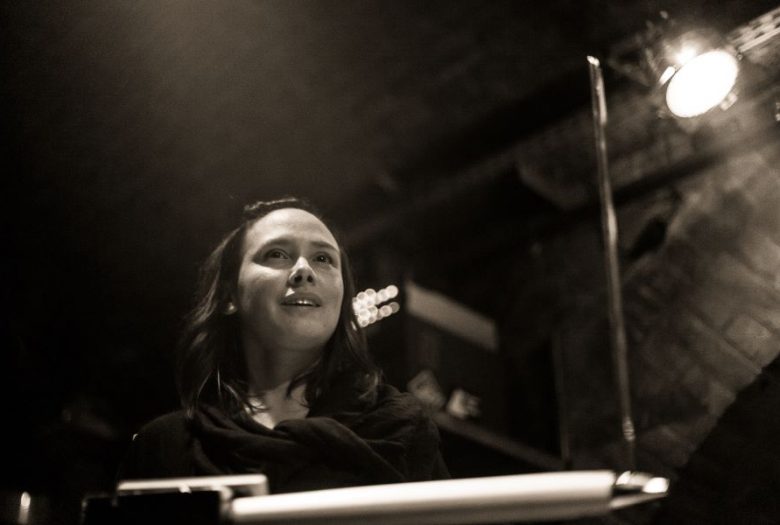 Inspired by Ewige Strömung (German for “eternal torrent”), the first of the Duino Elegies—Bohemian-Austrian poet Rainer Maria Rilke’s (1855–1934) collection of ten intensely mystical and richly symbolic poems—theremin maven Pamelia Stickney premieres new original compositions along with arrangements of her own work enmeshed with fragments of Messiaen, Bartok, Stravinsky, and Bach performed by her Transcendental Dissonance Quartet. Stickney will also present her Jatakas Suite for Alto Sax, Marimba, and Theremin + processing, written for and performed by Odes & fragments—the duo ensemble of Chris Mannigan and Danny Tunick.

Visionary electronics pioneer Bob Moog called Pamelia Stickney, “one of the most important innovators of the theremin living today,” and her unique talent has been captured both on recordings and in live performances by a wide spectrum of outstanding artists, including David Byrne, John Zorn, Simone Dinnerstein, Sebastien Tellier, and Bela Fleck & the Flecktones. Pamelia was featured in the documentary Moog (2004), where she was shown giving a casual theremin lesson over a glass of wine to Mr. Moog and later delivering a riveting solo theremin performance at a Moogfest in New York City. She has taught and lectured at Berklee College of Music, the New School, the Metropolitan Museum of Art, University of California Irvine, and she has given private lessons to numerous aspiring thereminists throughout Europe, Japan, and the U.S.
Currently Pamelia is working on her next album featuring her Transcendental Dissonance Quartet project as well as her Jatakas Suite, commissioned and performed by ODES & fragments. As of May 2019, she began collaborating with the Quatuor Wassily, for whom she has made arrangements and compositions for strings and theremin + processing. The programme includes pieces by Messiaen, Bartók, Bach, Berg, Zawinul, Coltrane, Lili Boulanger, as well as her own compositions. Besides her lifelong committment to learning/experimenting/developing her writing and arranging, Pamelia continues to perform her live improvisational solo theremin orchestra project worldwide.

The Transcendental Dissonance Quartet came together like magnetic force when its members found they were all were attracted to that indescribable something in music and were willing to let Stickney test out writing arrangements of Bach, Boulanger, and Messiaen (which were eventually recorded at Stickney’s birthday party in Shahzad Ismaily’s studio). Since then, they continue to let Stickney test, explore, expand, and learn not just how to compose/arrange for an ensemble but how to find her own way to create a springboard for these authentic musical beings to interact.

Odes & fragments have been exploring the depth and breadth of the saxophone/percussion. The pair’s musical interests and pursuits cut brutish and unpredictable swaths through the hierarchies of rock, jazz, folk and through/composed musics, yet align in a shared love of the rehearsal process and a commitment to the development of a repertoire with global reach.

Sarah Bernstein is a New York-based composer and violinist whose work incorporates vocals, electronics, improvisation and original text. She is known for her fiery multidisciplinary performances, and has garnered international acclaim for her distinctive recordings. She leads bands, performs solo, and collaborates with artists in avant-jazz, chamber music, experimental pop and noise. Nominated in the DownBeat Magazine Critics Poll for the past five years, Bernstein is a recognized innovator in forward-thinking jazz. Her approach merges post-tonal and polyrhythmic melody with sonic exploration and raw emotion. In addition to live performance, Bernstein’s music is featured on radio programs, podcasts, and film scores. She is originally from San Francisco, CA.

Chris Mannigan was born in Watertown, NY. He studied saxophone performance with Ronald Caravan, Joe Riposo, and Brian Scherer and composition with Christopher Hopkins, Joseph Downing, Daniel Strong Godfrey & Andrew Waggoner. He has appeared as a soloist with the Syracuse University Orchestra, and with a wide range of chamber ensembles and has recorded for the Arabesque, SUR and Between the Lines record labels. As a composer he has written extensively for stage, studio, film and theater.

Multi-instrumentalist/conductor Danny Tunick is very active on the edges of numerous artistic scenes in and around New York City. He has conducted or performed in world premieres by composers such as Charles Wuorinen, Annie Gosfield, Arnold Dreyblatt, Glenn Branca, Stephen Vitiello, and Julia Wolfe, among many others. Current projects include David First’s microtonal drone ensemble ‘The Western Enisphere,’ Dan Kaufman’s long-running post-literate chamber collective ‘Barbez,’ as bassist in Yvette Massoudi’s Persian funk band ‘Mitra Sumara,’ and as multi-instrumentalist in Cass Tunick’s Action Theater troupe ‘Second Nature.’ His band Sugarlife, led by Christian Dautresme, was proud to participate in the critically eviscerated production of Shahzad Ismaily’s short film The Taped Worm.