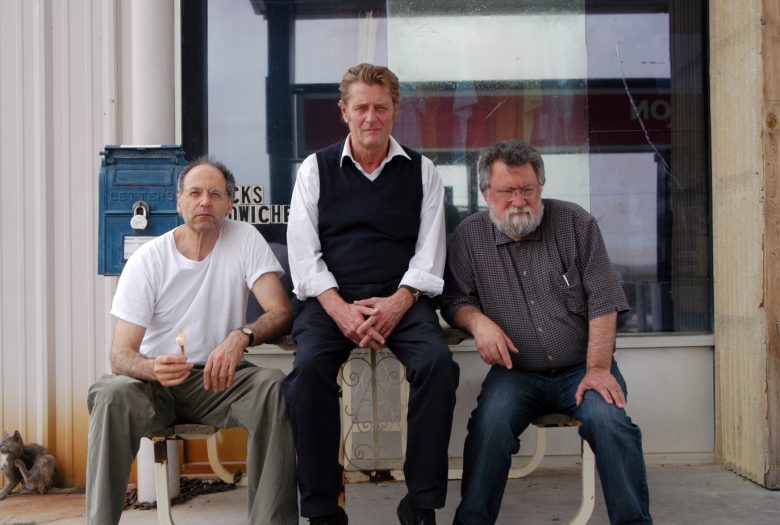 Evan Parker, Alexander von Schlippenbach, and Paul Lytton, known as The Schlippenbach Trio have worked as a unit for around forty-five years and is arguably the best-known group playing free jazz in Europe. Their group chemistry is founded on intuitive listening, interaction, the ability to respond in an instant and on the synergy between their characters, all capable of complementing as well as challenging one another. The spectrum of music in performance ranges from furor to elegy. It extends from energetic, forward-thrusting pieces via cool, calm, ambling passages and ballad moods to submersion in sound, in silence.

Although happy to fit occasional individual concerts into their work schedules, for the last fifteen years or so the trio has concentrated its touring into one sequence at the end of each year. In homage to the tragic Schubert/Muller song cycle this has become known as the Winterreise.

Originally scheduled as an appearance by The Schlippenbach Trio, due to unexpected visa issues, pianist Alexander von Schlippenbach could not attend. Pianist Matthew Shipp stepped in.

The British jazz saxophone revolutionary Evan Parker transformed the language and techniques of the instrument in the late 1960s and has since become one of the most admired and influential saxophone improvisers on the planet. Parker has been rewriting the book on the sounds that can be made with a saxophone for almost half a century, developing a remarkable post-Coltrane technique that has allowed him to play counterpoint on what was designed as a single-line instrument, generate electronics-like textures acoustically, and build a personal soundscape that avoids conventional tunes but has its own arresting lyricism. Parker has worked with comparable revolutionaries like John Zorn and Anthony Braxton, and played in experimental electro-acoustic groups and contemporary-classical ensembles – but he has also brought a sharp edge to more orthodox jazz lineups led by Stan Tracey, Kenny Wheeler and by the Rolling Stones Charlie Watts, and the celebrated South African orchestra Brotherhood of Breath. He has also recorded with singer-songwriter Robert Wyatt, with TV comic Vic Reeves, and has lent his inimitable sound to the more pop-oriented contexts of Scott Walker, David Sylvian and Jah Wobble. Evan has also curated festivals and run his own record company.

One of Europe’s premier free jazz bandleaders, German pianist Alexander von Schlippenbach’s music mixes free and contemporary classical elements, with his slashing solos often the link between the two in his compositions. In 1966, Schlippenbach formed The Globe Unity Orchestra—a big band that bridged the techniques of free-jazz and the techniques of the classical avant-garde (including the twelve-tone scale)—to perform the piece Globe Unity, which had been commissioned by the Berliner Jazztage. He remained involved with the orchestra into the ’80s. Schlippenbach began taking lessons at eight, and studied at the Staatliche Hochschule for Musik in Cologne with composers Bernd Alois Zimmermann and Rudolf Petzold. He played with Gunther Hampel in 1963, and was in Manfred Schoof’s quintet from 1964 to 1967.  After 1967, Schlippenbach began heading various bands—among them, the 1970 trio with Evan Parker and Paul Lovens and a duo with Sven-Ake Johansson, which they co-formed in 1976. In the late ’80s, he formed the Berlin Contemporary Jazz Orchestra, which has featured a number of esteemed European avant-garde jazz musicians including Evan Parker, Paul Lovens, Kenny Wheeler, Misha Mengelberg, and Aki Takase.

Paul Lytton—a central figure in the British free improvisation movement of the 1960s and 70s which included Derek Bailey, Evan Parker, and Paul Rutherford—was instrumental in reshaping the way drums and percussion were viewed in free music. He is one of a handful of percussionists from that time whose work allowed the drum kit to become even more free from the timekeeping constraints of jazz up to that point; the instrument becoming less a set of drums and more a series of membranes on which to create an atmosphere. His earliest experiments in homemade instruments and electronics with Evan Parker have spurred generations on to look outside systems with names such as “jazz” and “improv” and to explore new modes of communication in the moment. ?! marks the first solo recording of Lytton since 1979’s The Inclined Stick on PoTorch. The recording, as expected, is more structural or stratified, than linear or narrative. It allows the listener multiple levels and multiple views into the ever- changing language of one of the 21st century’s master musicians.