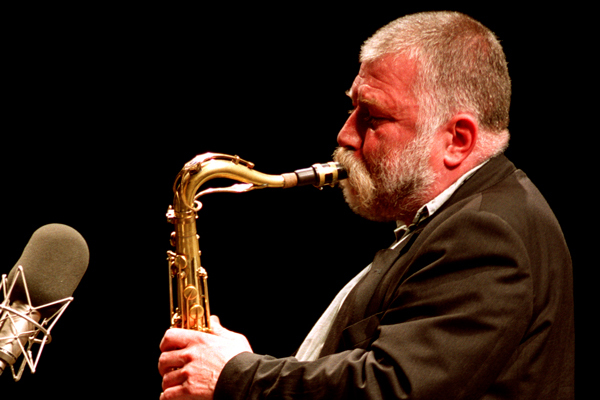 Peter Brötzmann was first a visual artist, attending the Art Academy of Wuppertal. A self-taught saxophonist, he began playing with Dixieland bands in 1959. In the early ’60s, he became involved with the avant-garde Fluxus movement. He began plying free jazz around 1964; in 1965, he played in a group with the virtuoso bassist Peter Kowald and the Swedish drummer Sven-Åke Johansson. The next year he played with Michael Mantler and Carla Bley’s band and became associated with Alexander Schlippenbach’s Globe Unity Orchestra. In 1969 Brötzmann helped form FMP, a long-lived free jazz label and presenter that issues recordings and sponsors live performances. In the ’70s, Brötzmann would play and record with pianist Fred van Hove, drummer Han Bennink, trumpeter Don Cherry, and trombonist Albert Mangelsdorff, among others. His circle of associates would continue to widen; in 1986 he would play (with drummer Ronald Shannon Jackson, guitarist Sonny Sharrock, and electric bassist/producer Bill Laswell) in Last Exit, a metal/free jazz group that enjoyed brief success. By the late ’90s, one would be hard-pressed to name a prominent free jazz musician with whom Brötzmann had not played. —Bio as of 2019