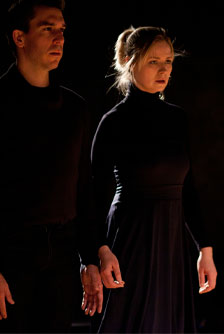 Peter Sciscioli (New York) / Ana Sofrenovic (Belgrade)
For their Brooklyn premiere, U.S. performer/choreographer Peter Sciscioli and Serbian actress/vocalist Ana Sofrenovic create a liminal space where sensation, states, situations and intentions intertwine in a vocal and movement collaboration. Begun via Skype in 2010, Sciscioli and Sofrenovic have since developed this work through residencies in Belgrade, New York and Zagreb, Croatia, using their cultural differences and aesthetic affinities to find a meeting ground. At the root of their work is the question, “how do we experience unseen and often indescribable connections with others across space and time?”

Peter Sciscioli and Ana Sofrenovic met in January 2006 during a professional training workshop led by iconic composer/singer/director/choreographer Meredith Monk, sponsored by Carnegie Hall’s Weill Music Institute in New York City. Since that time, they have engaged in a long distance, active exchange of ideas and performance practices, sharing their experiences and thoughts through emails and online video postings. In November 2009, Sofrenovic returned to New York as a CEC ArtsLink fellow, and was hosted by Monk’s non-profit organization, The House Foundation for the Arts (where Sciscioli also serves as Communications Director) and the Yale School of Drama. These encounters served as the starting points for their artistic collaboration.

Peter Sciscioli is a performer/choreographer whose work encompasses dance, music (voice and violin) and theater. In 2008 he founded Peter Sciscioli Performance Projects to support the creation of his interdisciplinary work. He is also a founding member of The M6: Meredith Monk Music Third Generation, and has worked extensively with Ms. Monk as a performer, assistant and producer. Sciscioli has also worked with such luminaries as Ping Chong, Jane Comfort, DD Dorvillier, Daria Fain, Philip Glass, Susan Marshall, Fiona Templeton and Mary Zimmerman throughout New York, Chicago and in Europe. His interdisciplinary works and collaborations have been seen at such venues as the 92nd St Y, The Duke on 42nd Street, Joyce SoHo, La MaMa, The Kitchen, Movement Research at the Judson Church, PS122; at Earthdance and The Yard; throughout Chicago; in Alaska, New Mexico, North Carolina, Utah and Vermont; and in Brazil, Croatia and Honduras. He is a graduate of Oberlin College and the Trinity/La Mama Program.

Ana Sofrenovic is an award-winning film and stage actress and vocalist based in Belgrade, Serbia. She began performing publicly at the age of four and received her training at the Belgrade Academy of Dramatic Arts and the Royal Academy of Music in London. She has played lead parts in some of the most significant film and theater productions in Yugoslavia and has appeared in several films for the BBC. Her experience in concert performance ranges from rock and jazz to music theater and contemporary music. In 2009 she was selected as a CEC ArtsLink Fellow (New York) and performed with Meredith Monk at BAM and was in residence at the Yale Drama School. Ms. Sofrenovic has created several original works for stages in both London and Belgrade, most recently CODA, a collaboration with a director, composer, visual artist and choreographer which challenged concepts of theater in Belgrade. She continues her research at home and abroad.