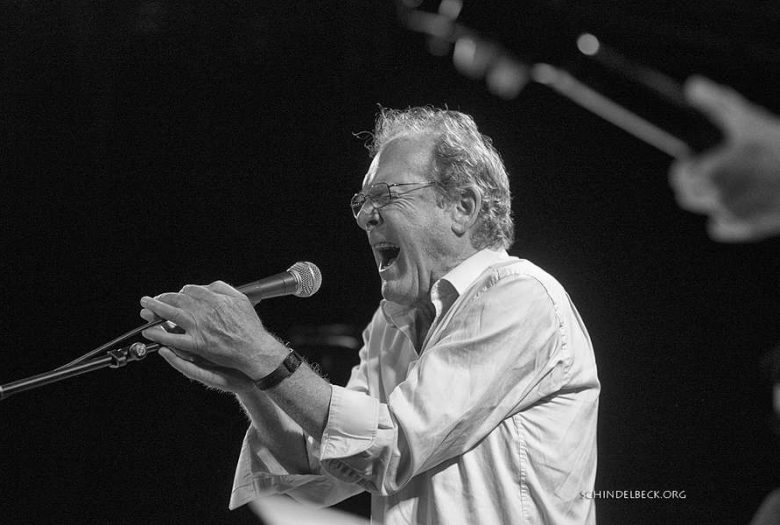 From London, the vocalist and percussionist doing ‘the Most Radical Music ever…but more extreme.’

Phil Minton comes from Torquay in the UK. He played trumpet and sang with the Mike Westbrook Band in the early 1960s, then in dance and rock bands in Europe for the latter part of the decade. He returned to England in 1971, rejoining Westbrook, and was involved in many of his projects until the mid 1980s. For most of the past forty years, Minton has been working as a improvising singer in groups, orchestras and situations.  He has a quartet with Veryan Weston, Roger Turner, and John Butcher, and ongoing duos with all the above. Recently, after a long break, he has been involved in several of American composer Bob Ostertag’s projects. Since the eighties, his Feral Choir, where he voice-conducts workshops and concerts for Anyone Who Wants to Sing, has performed in over twenty countries. –Bio as of 2018

Over decades, Roger Turner has brought the renowned volcanic power and finely-honed precision of his drum work to ensembles that have forged substantial connections with musicians both sides of the Atlantic and more recently from Japan. In addition to pioneering an acoustic percussive language that can run in tandem with approaches to contemporary electronic instruments, he has worked extensively in the microscopic laboratory of the acoustic duo situation where he acquired a highly developed sense of detail and of dynamic control. One of that select group of world-class players who have collectively redefined the language of contemporary percussion, in Turner’s hands minute inflections of tension can shape the group’s musical direction and galvanize a new level of audience experience. –Bio as of 2018