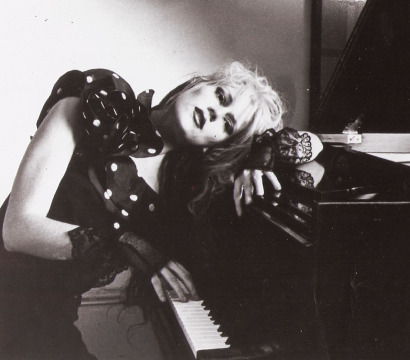 Phoebe Legere is a composer of Native American and French Canadian descent. She currently is studying composition at Juilliard. An influential member of New York City’s downtown performance scene in the 1980s and 90s, during the past decade Legere has increasingly focused her energy on interdisciplinary new media, ranging from virtual musical theater to experimental forms. A dynamic performer on piano, accordion and synthesizer, with a four and half octave vocal range and free-for-all approach to mixing jazz, cabaret, and rock, Legere initially earned renown as a songwriter with hundreds of songs in all genres, and was signed to Epic/Sony Records. Demonstrating Legere’s mastery of diverse contemporary musical forms, she had eight weeks of sold out shows at The Ballroom in 1993, where she performed original songs and blues, French Chansons and Native American chants “¦ and then opened up for David Bowie on a national tour. She has performed at the Chicago Cultural Center, Carnegie Hall, the China Club, Aspen Opera House, Freddy’s Supper Club, The Hong Kong Jazz Club, Philadelphia Art Museum, the Brooklyn Academy of Music, the Brooklyn Opera House, Symphony Space and the Nairobi Casino in Africa.